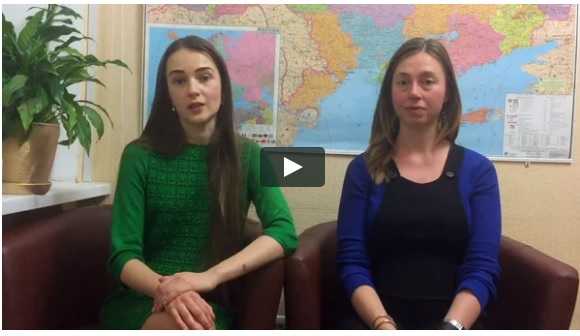 In three years, the war in Ukraine has resulted in close to 10,000 deaths and more than 23, 000 wounded. Thousands of civilians are being taken and jailed, tortured and put under pressure to silence them. Another number remains in the shadows: victims of sexual violence. All this happens in the middle of Europe. Right now! Today it is very difficult to investigate, to gather evidences and to bring to justice those responsible for these crimes. In addition to it Ukrainian laws do not allow us to condemn them properly. To fight against impunity, we have to change ukrainian laws by putting them in compliance with the international human rights standards. With your signatures and you supports, let’s change this!

Who we are ?
My name is Oleksandra, I am a human rights defender from “Center of Civil Liberties”. It has been 3 years now I am documenting war crimes and crimes against humanity in the international armed conflict in Ukraine. I am Marion and with Inna we are part of the team ZERO IMPUNITY, an international movement who fight against impunity of sexual violences. Together we are asking you to sign the petition to support the law Oleksandra and her colleagues have built. It’s about filling a big gap by putting the Ukrainian laws in compliance with the international human rights standards so that no victim is forgotten. All together let’s pressure on the Ukrainian government and parliament to pass this law!

Why is it so important?
In march 2014, Russia annexed Crimea and has carried out in eastern ukraine for almost 3 years an hybrid war. Russia supported armed groups in Donbas which began to terrorize the civilian population and quickly gained control over the region. Many people are illegally deprived of liberty and kept in inhumane conditions. Journalists, civil activists, lawyers, scientists and volunteers. Even pregnant women. After being released they talk about beatings and tortures.

The first victim kidnapped and tortured to death was Volodymyr Rybak, who tried to return the Ukrainian flag to the office building. Thereafter, according to human rights organisations, the unofficial jails in Donbas have seen tens of thousands of people. This practice continues. Thousands of civilians are being taken and jailed, tortured and put under pressure to silence them. But another number remains in the shadows: victims of sexual violence. Though the issue has been shrouded in silence, sexual humiliation, rape and genital mutilation have slowly become common practice in secret detention centers (link to Ukrainian Pravda).

Today it is very difficult to investigate, to gather evidences and to bring to justice those responsible for these crimes. In addition to it Ukrainian laws do not allow us to condemn them properly. Let’s change this. Let’s put the Ukrainian laws in compliance with international humanitarian law and fight against international crimes!

You can help us to fight against impunity
Ukraine must punish properly the abuses committed on its soil, even in such difficult conditions when parts of its territory are under effective control of the Russian Federation. It is crucial that Ukraine investigates crimes and brings to justice the perpetrators who commit crimes on the territory controlled by the Ukrainian government. But in its domestic law Ukraine has significantly limited the opportunities of the investigation and to bring the perpetrators of international crimes to justice. How is it possible the national Criminal Law still does not provide adequate legal instruments for this task? And why doesn’t the Criminal Code even includes the concept of crimes against humanity and articles on war crimes are very general and hard to apply? This is a direct path to impunity. And it’s irresponsible to the people who survived and to their pain.

Together with the Human Right Agenda in Ukraine we have written a draft of law to bring the Criminal Code of Ukraine in line with international humanitarian law, to provide simple tools to prosecute grave crimes against human rights in an efficient way.

It’s been presented to the Administration of President, the Ministry of Justice and the different departments of the Ukrainian governmental agencies. Now these agencies shall tell us if they would consider bringing it to the Rada, the Ukrainian Parliament for it to be voted.

Your signatures and your support will show a national and an international interest for the question, which will make Ukrainian authorities take our draft law seriously and to offer the victims and to our country a path to justice.