Euromaidan SOS: the activists complaints about unlawful detention in the Russian-occupied territories are being prepared for submission to the ECHR and the UN 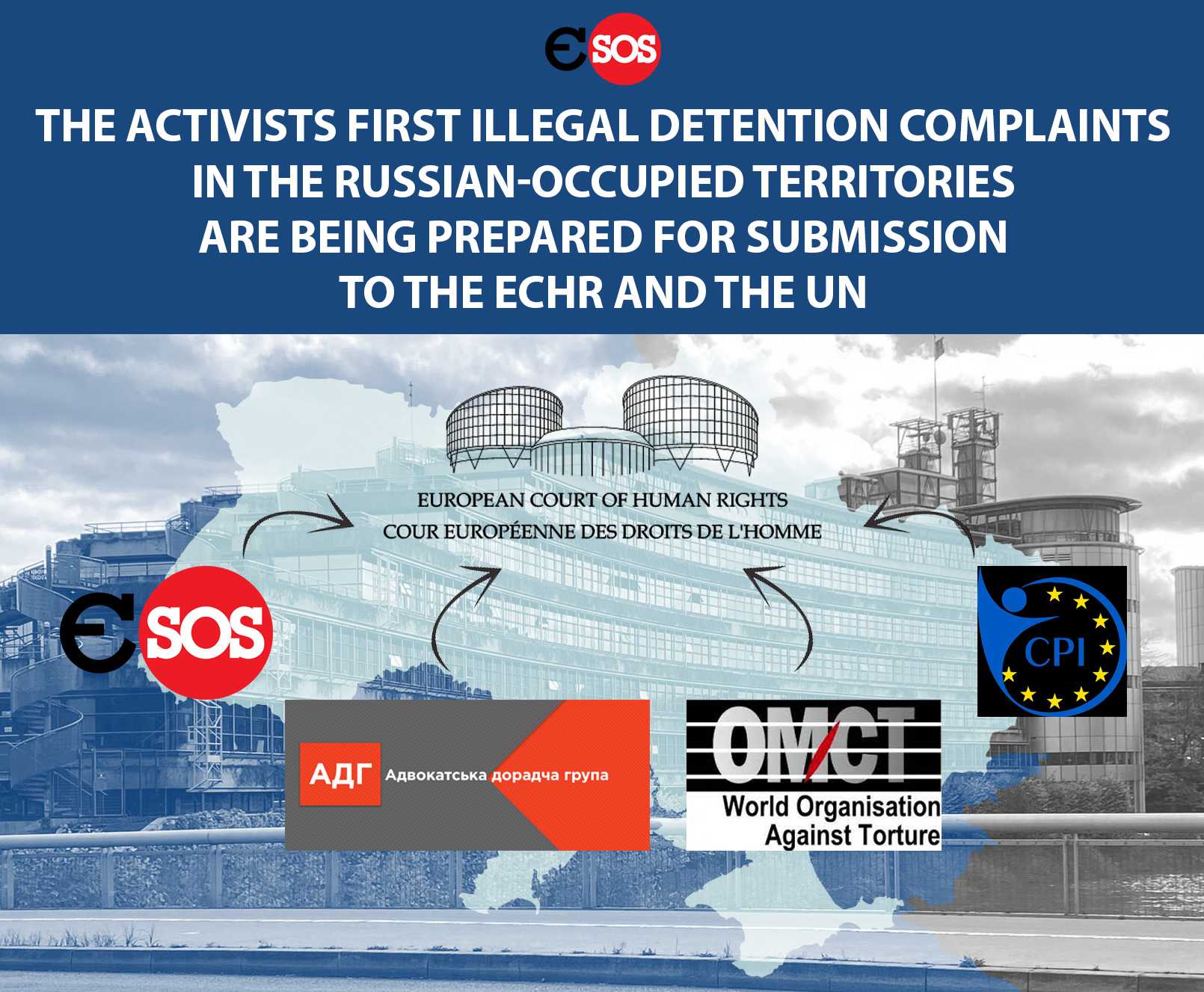 Euromaidan SOS continues to monitor information about persecutions, abductions, detainment of the representatives of local government, journalists, religious leaders, volunteers and civil activists happening on the temporarily occupied Ukrainian territories after the full-scale Russian invasion in February of 2022.

Euromaidan SOS and lawyers from the NGO “Advocacy Advisory Panel”, which is made up of lawyers who have been working on the cases of the events of Euromaidan as well as from the Centre de la Protection Internationale (Strasbourg, France), are jointly working on the preparation of the submissions to the European Court of Human Rights.

As per lawyer Mariia Zivert: “The work of courts has stopped with the beginning of Russian aggression, that’s why we have changed our focus to work with victims of war crimes. We are coordinating our work with the Centre de la Protection Internationale located in Strasbourg, as they are helping with the drafting of the complaints and can correspond with the court as well. And this is precisely what is currently unavailable or is very difficult to organize in Kyiv”.

Lawyers representing the interests of the victims (or their relatives), have started work on 7 cases to prepare submissions to the ECHR. These cases are related to abductions of civilians in the Kyiv, Mykolaiv, Kharkiv, and Kherson regions.

Besides that, Euromaidan SOS, together with the World Organisation Against Torture (Brussels, Belgium) are preparing submissions to the UN Working Group on Enforced or Involuntary Disappearances about 5 cases of disappearances on the occupied territories where relatives of those people have agreed to corresponding legal actions.

“There are two international mechanisms to which relatives of those missing during hostilities or Russian occupation can turn – the European Court of Human Rights and the UN Working Group on Enforced or Involuntary Disappearances. Relatives or lawyers of a person abducted by the Russian military or other security forces may apply to the ECtHR under Rule 39. This rule applies in the event of a serious threat to life or health. The ECtHR makes interim binding decisions under Rule 39 for several days. Relatives or lawyers of the missing person can also turn to the UN Working Group, which acts as a liaison between the abducted person’s family and the government of the state whose abducted people were, to find out the fate and whereabouts of the victim “said Yevhen Yaroshenko, Crimea SOS analyst.

In total, from the start of the monitoring, we have collected information about 255 people who suffered persecution in one form or another. 154 of them are still in detention on the occupied territories, or their location remains unknown.

As a reminder, Euromaidan SOS has prepared a form for collecting information about prisoners of war and arrested civilians. If you have witnessed the detention of a person, or have any other information about a civilian or military person being held captive, please fill out the form. We want to add that together with lawyers we created working groups to provide effective legal aid to the victims and their relatives, as well as to ensure those people are represented in the ECHR and the UN which should become a powerful option in their protection.