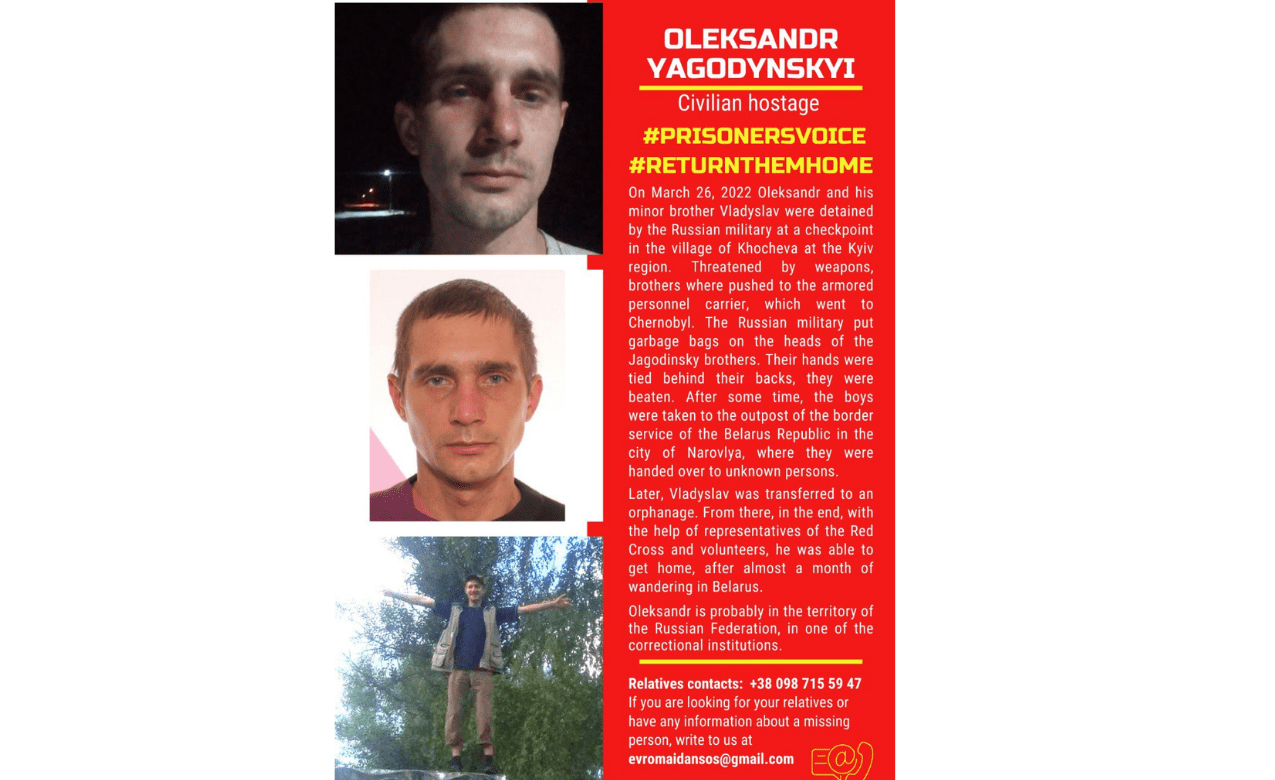 For more than half a year, the family of Olexandr Yagodinsky has not had any information about him, except for a one-line letter and information from potential fraudsters who claim to know about his whereabouts in the Russian Federation.

The story of the illegal detention of 30-year-old Olexandr began on March 26 of this year, when he, along with his brother Vladyslav, a minor at the time, was detained by the Russian military at a checkpoint in the village of Hocheva, Vyshgorod district, Kyiv region.

The men, who were returning to the village of Orane on bicycles along the highway “Kyiv-Strakholissya,” were stopped by four soldiers of the Russian Federation around 14:00. The occupiers took the passports of the Yagodinsky brothers, ordered them to roll up their clothes to check the tattoos on their arms and legs. The Russian military did not find the tattoos; instead, they began to discuss the brothers’ hypothetical involvement in saboteurs.

After crossing the Vuzh River, the Russian military put black garbage bags on the Yagodinsky brothers’ heads. Their hands were tied behind their backs, the Russian military beat both men. After some time, the boys were taken in an unknown direction. They were handed over to anonymous persons dressed in black tactical uniforms with the “Russian Militia” inscription on the back. Also, on the premises to which the Jagodynskyi brothers were brought, there were persons in green camouflage uniforms with chevrons of the Republic of Belarus border service. While communicating with them, Vladyslav found out that they are at the checkpoint of the border service of the Republic of Belarus in the city of Narovlya.

Later, Vladyslav was transferred to an orphanage. From there, in the end, with the help of representatives of the Red Cross and thanks to the support of volunteers, he was able to get home on April 22, after almost a month of wandering in Belarus.

If the story of the youngest of the Yagodinsky brothers, we can say, ended happily, then the further fate of his brother is unknown. Currently, it is only known that he is most likely in the territory of the Russian Federation, in one of the correctional facilities. And most likely, this penitentiary is located in Bryansk, Russia. Olexandr’s mother, Larisa Yagodynska, told us that she was contacted by unknown people who claimed that her son was in detention center No. 5 in Taganrog, in southern Russia. Also, three weeks ago, she received a letter in which her son’s handwriting, in Russian, says, “I’m alive and well” (style and punctuation preserved – ed.).

And we will remind you about the flash mob of the “Civil Liberties Center” Prisoners Voice initiative – #ReturnThemHome #Prisoners Voice.

Share the story of brothers  and other prisoners on your social media pages.