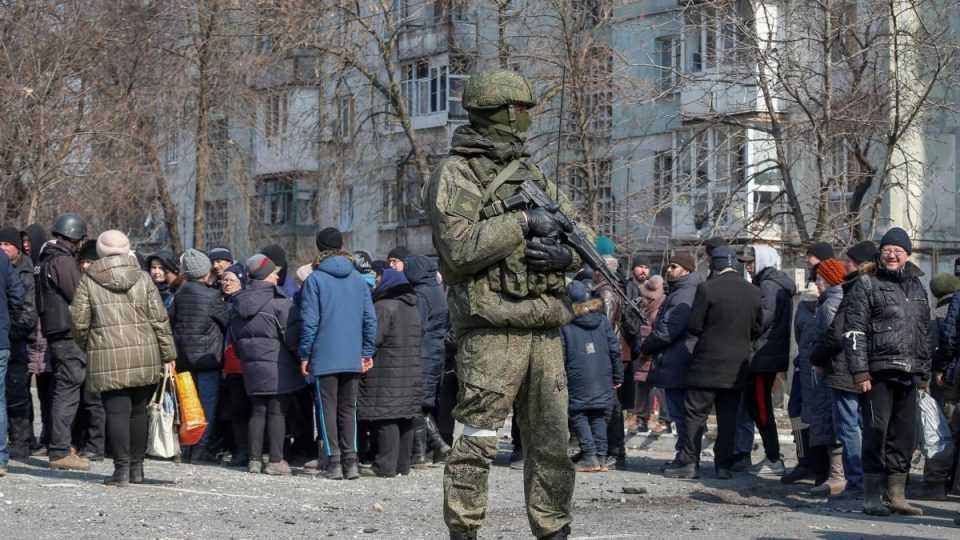 “You have one chance: move to the filtration camp with your family. If you don’t want to do that, we will kill you.”

That is how Gennady, 47, recollects the conversation with Chechen troops when they showed up at his parents’ house in Mariupol, where he had fled to be with his wife and two children after his own house had been destroyed by the bombing.

The former Azovstal steel plant worker, who has asked to withhold his surname for safety reasons, told i the Chechen troops had managed to get hold of his address when he was arrested just a few days earlier. On that occasion, Gennady said, he had gone back to his own house in the desperate hope of finding some provisions for his family. The situation had become so bad that he and his family had no other option but to drink water out of the boiler.

“It was dirty water but in that moment it was better than nothing,” Gennady, who was trying to provide for his 80-year-old dad, 76-year-old mum, wife and two daughters aged nine and six, told i.

He took the trip back to his house, despite knowing that “peaceful civilians were being shot in the middle of the street”. He knew it was dangerous, but he couldn’t let his family starve.

Upon arriving to his house, the door of every flat in the nine-storey building was open, raided by Russian soldiers for anything they could find.

No food was left in his flat, but he found some cat food and took it as it was the only option.

He also saw 11 graves in the garden in front of his house “where flowers used to grow”. As he walked back to his parents’ house with the cat food in his hand, he was stopped by Russian soldiers, who arrested him and ordered him to undress completely.

“The soldiers arrested me as they thought I was maybe a Ukrainian soldier from Azov [a battalion active in Mariupol with far right links],” he said.

“The Russians asked me where I was going. I said my family was starving and that they had asked me to get food. They told me to undress completely as they wanted to check if I had military tattoos or other Ukrainian military marks.

“They said they wanted to take me somewhere but I kept telling them I had a family and I have children, they are hungry and want to eat something. And so once they saw I had no tattoos they let me go but asked for my address before releasing me.”

When the troops arrived just a few days later on 26 March, the former Azovstal worker said he told them he could not go as his family would “die without me”. The Chechen replied: “Okay, we’ll take everyone.”

When he pleaded with them to let the family go to neighbouring Zaporizhzhia – where they had previously tried to flee but were turned away by Ukrainian troops who said it was too dangerous – the troops replied: “You have one chance, move to the filtration camp with your family. If you don’t want to do that, we will kill you.”

At the filtration camp

A satellite image showing the tented camp in the Russian controlled village of Bezimenne in eastern Ukraine, to the east of Mariupol (Photo: Maxar Technologies)

When they arrived at the filtration camp in Bezimenne, 11 miles east of the destroyed city of Mariupol, they had their passports and phones taken from them. They had taken lots of pictures to document what had been happening back at home, but their phones were wiped out by the Russian military.

Gennady noticed there were Russian soldiers surrounding the camp all around, “so if someone tried to escape they would beat them”.

Gennady said he estimates there were about 1,000 people at the filtration camp which was packed with big tents which had a capacity of 50-60 people.

“After three or four days later an epidemic of dysentery started as the water wasn’t clean, we couldn’t wash our hands and food was given once a day, a spoonful of porridge. We got water but I don’t know where it came from as it was so dirty, the quality was terrible,” he said.

The family slept on the ground but managed to get hold of some blankets thanks to donations by the local community.

He said his nine-year-old daughter was at one point approached by a Russian TV journalist who asked her to “lie” about the war and say the Ukrainian soldiers were the ones killing civilians. Gennady told the journalist to leave her alone as she had spent most of the war in a basement and, as a child, could not know the reality of things.

A Federal Security Services (FSB) official overheard his objection and took him into a separate room. His phone was taken and all his social media was inspected for a sign of allegiance to the Ukrainian army, which he had not yet joined as he wanted to ensure his family’s safety.

“He asked me why I am not a soldier. I said I am really religious and I don’t want to kill other people,” he said.

“He released me but said: ‘We will meet in the future.’”

During his period at the camp, which went from 26 March to 10 April, Gennady said he saw a woman with two children being taken away by the FSB because she had a pro-Ukraine poster. “Nobody knows what happened to this woman”, the dad-of-two said, adding that while they were there, his family looked after her children, but he does not know what happened to them after they left.

Gennady’s account was backed by Ukrainian human rights organisation Centre for Civil Liberties. i was unable to independently verify the details of his story.

Gennady said he was told by Russian officials at the camp that his only way out was by joining the Russian army in their fight against his own people. His family could stay with Russian relatives if they had any, or they would be taken to remote cities in Russia.

Gennady said he was saved by the fact that he had two children and elderly parents – including a father who had suffered a concussion when their home was shelled in Mariupol. The exceptional circumstances allowed for him to go with his family to their relatives in the Russian city of Yakutsk, in east Siberia.

Their passports were returned, but only after the Russians called Gennady’s family to verify their relationship.

Those who lacked relatives in Russia would be removed to remote parts of the country, with their passports potentially being withheld so they could not leave.

Gennady said there were special Russian buses leaving from the filtration camp and which took people to Russia. On his way to Yakutsk, however, the 47-year-old remembered he had a friend in Voronezh, in southwestern Russia, who would be able to help them.

The friend met them and hosted them for a night. For the first time in almost a month, Gennady was able to shower.

His wife, mother and children crossed the border into Latvia before Gennady and his father followed. They spent a day there in a refugee centre before going to Warsaw, Poland, where they also spent only one night as it was already crowded with refugees. The family moved to Poznan, where Gennady had worked in the past, so he met with a friend and former colleague who found them a house to stay in.

The family is now settling in Poland where it is “peaceful”, but Gennady said they have been scarred by the experience.

His child “keeps screaming at night, my wife has lost 9kg, every member of my family is in bad health”, he said, before adding that they now find it “very difficult to understand it’s not war and that it’s a really peaceful place”.

The location of the Russian-controlled “filtration” camp at Bezimenne, which means Nameless in English, was revealed exclusively by i last month as the mayor of Mariupol warned that thousands of people were being taken unwillingly to Russian territory.

I has also been told that filtration centres have also been set up in Snizhne, Dokuchajevsk, Starobesheve and Torez in eastern Ukraine, while transit points identified by this newspaper include a school in Crimea and a sports centre in the Russian city of Taganrog, as well as border crossings at Matveev Kurgan, Veselo-Voznesenka and Chonhar.

Despite all he has been through, Gennady is resolved to go back to Ukraine and join the resistance.

“Ukraine is my motherland and that is why I want to attack the Russians and save Ukraine, my people, my family,” he said.

“I am not afraid of the Russian army and my family really supports me in my decision to return to Ukraine and be a soldier. I must fight, I must be strong because it’s my country, I must fight for it.”