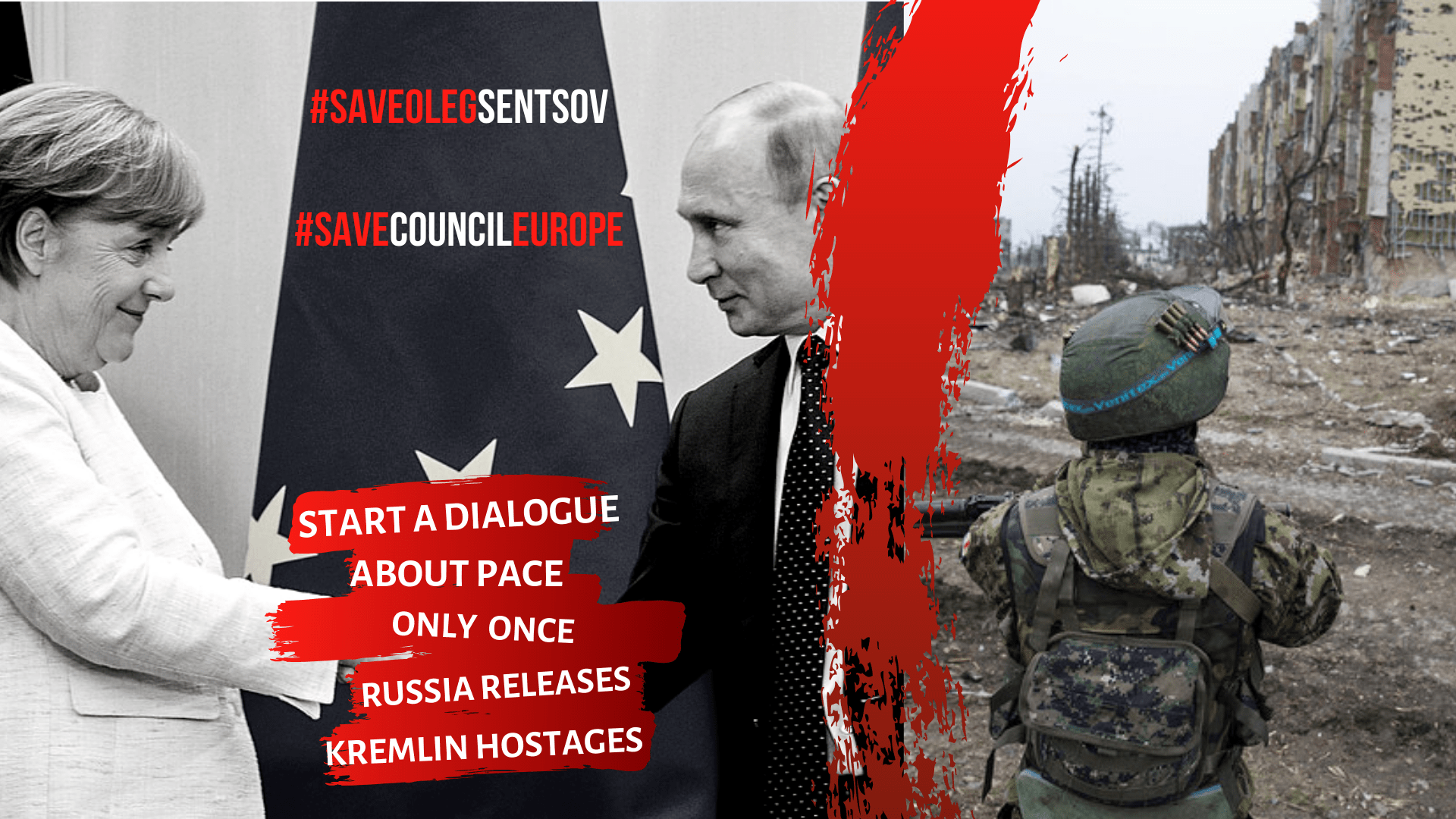 To: Ministers of Foreign Affairs of the Council of Europe Member State

We, the participants of the #SaveOlegSentsov Global Action from all over Europe, would like to call on you to oppose the return of the Russian Federation to the Parliamentary Assembly of the Council of Europe (PACE) until it releases all Ukrainian political prisoners, hostages and sailors. This was PACE’s requirement for Russia.

In 2014 and 2015, PACE imposed sanctions on Russia for violation of Ukrainian sovereignty, illegal annexation of Crimea, military occupation of Ukrainian territory, threat of military force against peaceful inhabitants, religious persecution and illegal detentions. None of this has been stopped or reversed so far.

We strongly believe that even discussion about returning Russia to PACE cannot begin without at least liberating all Kremlin hostages in the Russian Federation and occupied Ukrainian territories.

As of now, more than 98 Ukrainian political prisoners are held hostage in Russia and occupied Crimea. More than 120 prisoners and civil hostages are held in the occupied Donbas, which is under the de-facto control of Russia as recognized by Article 4 of the PACE report “Legal remedies to human rights violations on the Ukrainian territories outside the control of the Ukrainian authorities”. Among those detained are civic journalists, students, lawyers, human rights activists and others.

Besides the requirements to stop the illegal occupation of Ukrainian territory and military aggression against Ukraine, PACE obligated Russia to guarantee human rights of all inhabitants of Crimea and occupied territories. Nevertheless, the Russian Federation keeps escalating the situation by continuing to perform illegal arrests and detentions of Ukrainians. For example, on November 25, 2018, Russian authorities arrested 24 Ukrainian sailors in their vessels followed by a lack of a  decisive reaction by the international community.

Despite the deteriorating human rights situation, on May 16-17 the Ministerial meeting of the Council of Europe (COE) may nevertheless endorse the mechanism which would eventually deprive PACE of its powers to impose sanctions and set conditions for Russia’s unconditional return to PACE. By doing this, the COE would turn a blind eye on Russia’s crimes, thus greenlighting more violence against peaceful inhabitants and further violations of international law.

Are you and leaders of other Western democracies, which have been a lighthouse for Ukraine’s democratic transformation since the Revolution of Dignity, ready to take co-responsibility for crimes perpetrated by the Kremlin’s regime?

For the sake of the future of international law and the protection of human rights, we are calling on you to:

We are convinced that the Russian Federation has to make a step in the right direction in order to earn back its right to vote.

While currently celebrating its 70th anniversary, the Council of Europe is standing at a crossroads. But we are convinced that the values and principles of human rights do matter for the member states and will prevail.

Association of Relatives of Political Prisoners of the Kremlin

Institute for Peace and Democracy, Azerbaijan/Netherlands

Euromaidan-Warsaw Foundation, Poland
Association of Ukrainians in the Republic of Ireland

Oleksandra Matviychuk, head of the board of the Center for Civil Liberties

Tetyana Pechonchyk, head of the board of the Human Rights Center ZMINA

Oleksandra Romantsova, executive director of the Center for Civil Liberties

Olena Halushka, member of the board of the Anticorruption Action Center

Kateryna Butko, Project coordinator of the All Ukrainian Association “Automaidan”