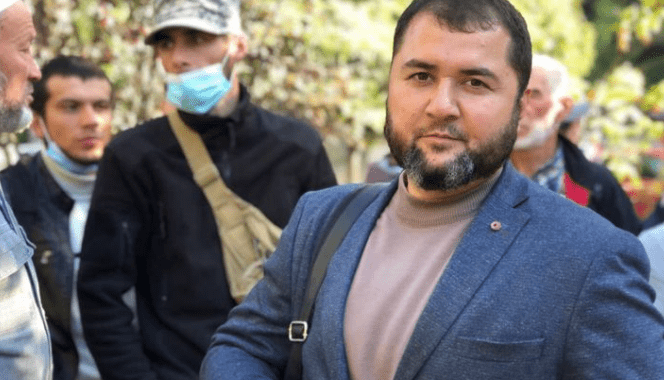 On October 25, 2021, the law enforcement bodies of the occupying administrations detained more than 20 Crimean Tatars, who came to a court hearing that was held at the so-called “Crimean garrison military court.” People came to listen to the court proceedings that viewed the appeal case of their three compatriots: Rustem Emiruseinov, Arsen Abkhairov, and Eskander Abdulhaniiev.  Last year those three people were illegally sentenced to long prison terms under falsified charges of their alleged participation in a terrorist organization (Krasnohvardiisk group of “Hizb ut-Tahrir case”). The so-called “Crimean garrison military court” hosted a video streaming of a court hearing at the Military Court of appeal in the town of Vlasikha. That court was viewing the case of the abovementioned political prisoners.

Among those detained, there are many human rights defenders and civic activists who have been providing support to victims of political repressions in Crimea since the beginning of the Russian occupation. For instance, Diliaver Memetov (son of Remzi Memetov, who has been imprisoned for over five years under fabricated charges) and a civic journalist of “Crimean Solidarity” Zidan Adzhykeliamov (his house was illegally searched in May 2021) were among the detained.

After Russian law enforcement bodies detained people who came to listen to the court hearing, they started intimidating the lawyers who came to defend their clients. For instance, officers from the Center to Counter Extremism did not allow a lawyer Rustem Kiamilev to access his client Diliaver Memetov; they also threatened to press admirative charges against the lawyer for “failing to abide by lawful demand of a police officer.” Besides, Russian law enforcement officers demanded that a lawyer, Edem Semedliaiev, took off his clothes. When the lawyer refused, he got detained and accused of an administrative violation for “failure to abide by lawful demand of a police officer.”

Over the last two months, this is the third case of mass unmotivated detentions of Crimean Tatars in occupied Crimea. On September 4, 2021, Russian law enforcement bodies detained at least 53 persons who gathered under the building of FSB in order to receive information about the fate of Nariman Dzhelial, Asan Akhtemov, Aziz Akhtemov, Eldar Odamanov, and Shevket Useinov, who had been abducted after illegal home searches. On October 11, 2021, Russian police detained 15 persons who came to a court hearing at the “Crimean garrison military court,” which viewed the case of a so-called “Krasnohvardiisk group of Hizb ut-Tahrir.” Later most of those people were fined for an alleged violation of anti-pandemic measures. Several persons received an administrative arrest for several days.

As the events in Crimea demonstrate, Russian occupying authorities use additional repressive measures in order to fight those who express any disagreement with the occupying regime. First, the Russian occupying authorities were falsifying criminal cases by planting forbidden literature during the searches or using torture to receive necessary statements. Then Russian authorities restricted access of audience to the court hearings in falsified criminal cases. The next step was to forbid receiving information about the court proceeding from the street next to the court and to use administrative persecution against people who gathered near court buildings. Now we see yet another measure: the detained have restricted access to their lawyers, lawyers are not allowed to see their clients and face administrative charges themselves.

The Russian Federation constantly intimidates human rights defenders, who act on behalf of victims of political persecutions. Lawyers in Crimea face regular intimidation and threats with regard to their professional activity. This practice violates the international norms as well as the national legislation, which implements measures of protection for lawyers. An illegal arrest of a lawyer Edem Semedliaiev blatantly violates the “Basic Principles on the Role of Lawyers,” adopted by the Eighth United Nations Congress on the Prevention of Crime and Treatment of Offenders (1990). Those principles guarantee that the defenders can freely perform their professional duties (without facing intimidation, unnecessary interference, and punishment for their professional activity).

All the abovementioned facts prove that Ukraine and the international community do not make enough effort to stop blatant violations in Crimea. With regards to this, it is necessary to enhance the work of the Crimea Platform, whose goal is to terminate the suffering of people who live on the occupied Peninsula.

Based on this, we demand that the Russian Federation as an occupant of the Autonomous Republic of Crimea and the City of Sevastopol:

We call on governments of foreign states, international organizations, and in particular – members of the Crimea Platform to:

PLATFORM FOR THE RELEASE OF POLITICAL PRISONERS