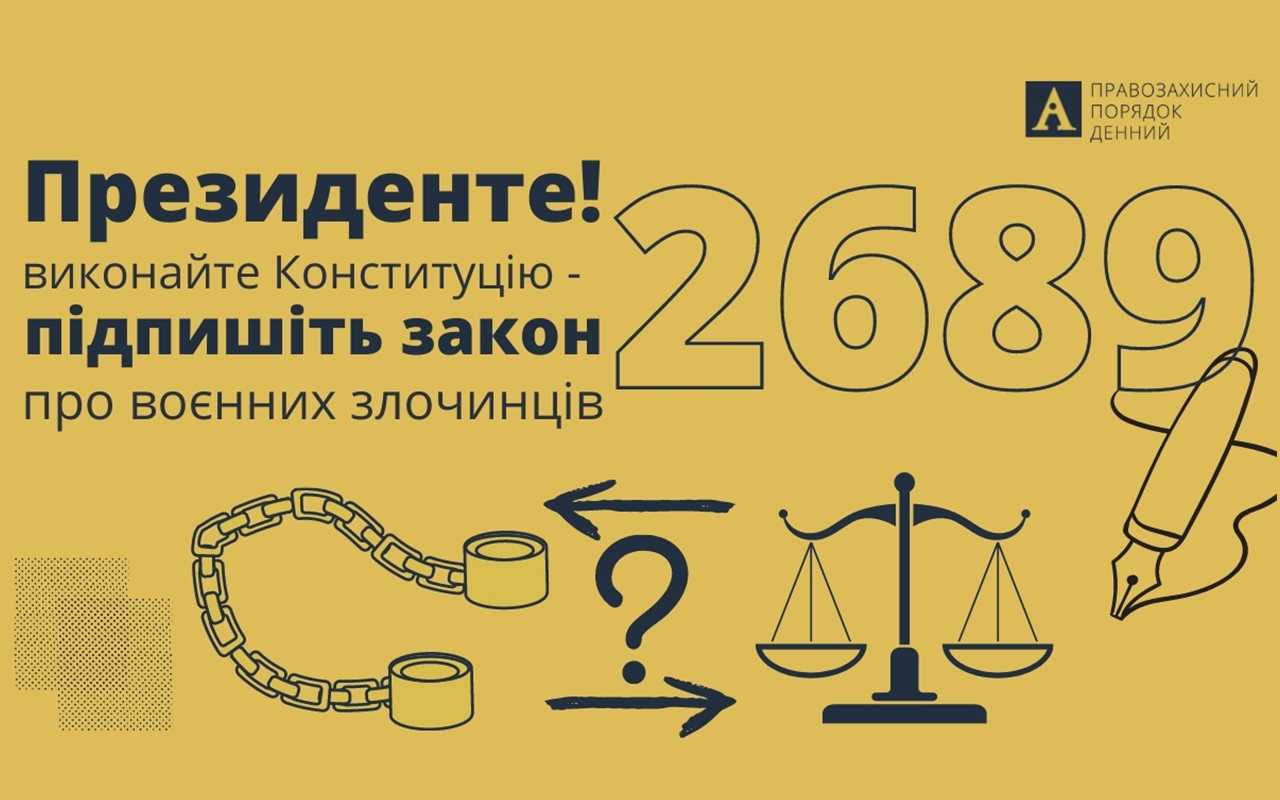 Dear Mr. Chairman of the Verkhovna Rada of Ukraine!

From the beginning of the Russian Federation’s armed aggression against Ukraine, we have been working to help the victims of war crimes and crimes against humanity committed in Donbas and Crimea. Over the years, human rights activists have collected thousands of stories of people being beaten, raped, hammered into wooden coffins, passed electricity through their genitals, and had their limbs cut off. The vast majority of these people were civilians, who proved to be completely defenseless against people with weapons.

Unfortunately, this horrible practice still continues and our state is unable to effectively counter it, in particular, due to the imperfection of criminal law on liability for war crimes and crimes against humanity.

Hope to change the situation for the better appeared on 20 May 2021, when the Verkhovna Rada of Ukraine adopted the Law of Ukraine “On Amendments to Certain Legislative Acts of Ukraine on the Implementation of International Criminal and Humanitarian Law” (the so-called on War Criminals Act). The draft law was developed by MPs in close cooperation with human rights defenders, Ukrainian and foreign experts. The adoption of the Law was welcomed by international organizations and international missions working in Ukraine.

The law is designed to give hope of justice to tens of thousands of people who have already suffered from war crimes and crimes against humanity as a result of Russian aggression, and to prevent new atrocities against ordinary people. Please note that according to Article 6 of the Law of Ukraine “On Fundamentals of National Security of Ukraine” the state aims to guarantee the constitutional rights and freedoms of citizens as its first national priority. Furthermore, war crimes and crimes against humanity are precisely the most serious human rights violations. Thus, the adoption of the Law on War Criminals is fully in the interests of Ukraine’s national security.

Unfortunately, more than three months have passed since the adoption of the Law by the Parliament. However, it has not yet entered into force due to an unforeseen by the Constitution “pause”, which lasts for more than 100 days.

This unjustified delay in signing and promulgating of the Law torments victims of war crimes and their families, as it casts doubt on the sincerity of our state’s intentions to fight war crimes and crimes against humanity.

Human rights activists and former prisoners who survived the captivity and Russian prisons call on the President of Ukraine and the Chairman of The Verkhovna Rada of Ukraine to immediately sign and promulgate the Law of Ukraine “On Amendments to Certain Legislative Acts of Ukraine on Implementation of International Criminal and Humanitarian Law” and thus to fulfill the requirements of the Constitution of Ukraine Article 94.

Center for Civil Liberties, Head of the board

The letter signed by:

Center for Political and Legal Reforms