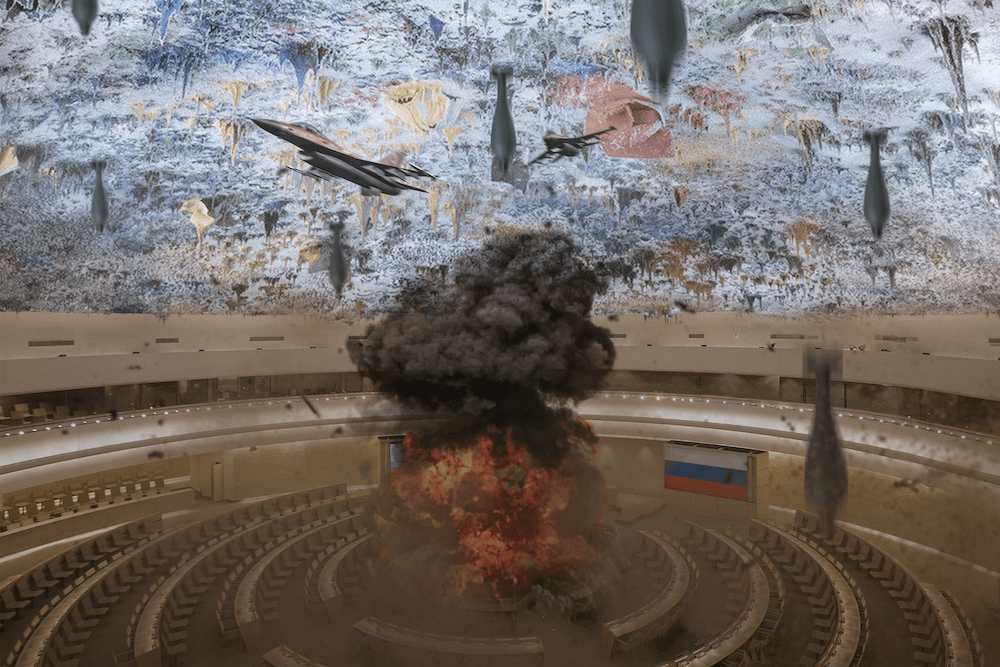 The undersigned organizations call upon the UN Member States to not vote in favor of Russia as a message that human rights violations in a number of countries cannot go unpunished, and that Russia should not see its election and membership of the Human Rights Council as a reward to further impunity for the human rights violations committed in Syria, Ukraine, and Georgia.

UN General Assembly Resolution 60/251 asks that those voting for members of the Human Rights Council “take into account the contribution of candidates to the promotion and protection of human rights.” This guidance applies to candidates’ efforts to protect and promote human rights in their own countries and abroad. However, as referenced below, Russia’s actions in Syria, Ukraine, and Georgia stand in clear contrast to the Human Rights Council’s commitment to human rights.

Since the military intervention of Russia in Syria in 2015, Russian-Syrian military joint operations had committed indiscriminate attacks against civilians, protected sites, and civilian infrastructure in Aleppo1, Eastern Ghouta2, and Idlib3 in Syria. In March and July 2020, the UN Independent and International Commission of Inquiry on the Syrian Arab Republic4 had found Russian forces directly responsible for war crimes in Idlib and provided further and detailed information on the role of Russia in committing war crimes and aiding the Syrian government in conducting airstrikes against civilians and the civilian population in Idlib5. It is shocking that a State found responsible for war crimes by an HRC investigation mechanism should be granted a seat in the same UN venue without scrutiny from the international community.

Protection of civilians in Syria and fulfillment of victims’ rights for justice have been averted by the continuous efforts of Russia to prevent impartial accountability for crimes in Syria, abusing its veto power and using it in contexts of war crimes and crimes against humanity (in defiance of the ACT Code of Conduct for the Responsibility to Protect6), for instance with a veto to refer Syria to the ICC in 20147, additionally using a veto to cancel a UN inquiry mechanism on the use and adjudication of responsibility for the use of chemical weapons in 20178 and more recently its withdrawal from the deconfliction mechanisms9 to protect hospitals, schools and other civilian infrastructure from indiscriminate attacks in Syria, and its veto on the cross-border humanitarian aid delivery authorization10.

Since occupying Crimea in 2014 Russia has pursued a policy of changing the peninsula’s demographic composition. This is being done, among other things, through illegal transfer of Russian citizens11 to the occupied territory of Crimea as well as through expulsion12 of representatives of Ukrainian, Crimean Tatar13 and other ethnicities that are opposed to the occupation. Arbitrary detentions, torture and interrogations of journalists and bloggers14 as well as systematic freedom of speech15 violations have become common practice for the occupying authorities.

In 2014 open hostilities broke out in eastern Ukraine against the militants of the self-proclaimed Donetsk and Luhansk People’s Republics, which are unofficially supported by Russia16 . Russia has been providing them17 with armaments and funds as well as carrying out political coordination of the republics’ actions, while Russian troops have been directly involved in the conflict18. The presence of Russian troops in Donbas indicates Russia’s involvement in an international armed conflict19. According to the UN, the number of victims has already reached 40 thousand (including 13 thousand killed)20. According to the UN Human Rights Monitoring Mission’s report Human Rights in the Administration of Justice in Conflict-Related Criminal Cases in Ukraine April 2014 – April 202021 published on 27 August 2020, the most widespread violations in the temporarily occupied territories of Donbas and Crimea are abductions, torture22 and lack of effective legal remedies23.

In August 2008, Russian previous aggressive policy of supporting secessionist movements in Georgia’s two territories of Abkhazia and South Ossetia, climaxed into the military invasion and subsequent recognition of the two so called independent republics. This marked the first instance of forceful change of borders in Europe since World War II, in grave violation of international law and practice. The military actions against Georgian armed forces resulted in 408 immediate casualties and 20,000 displaced persons24. What is more, the subsequent steps on those territories have taken the form of effective ethnic cleansing, when the houses formerly owned by ethnic Georgians are being annihilated in an attempt to change the history and erase the past.25

Unfortunately, this human tragedy is not over and continues as we speak, with the Russian armed forces advancing further into the territory of Georgia, occupying houses, gardens and pastures of the local population, kidnapping them regularly and depriving them the possibility to visit the houses of worship and the cemeteries of their ancestors26. Those ethnic Georgians living beyond the occupation line – most of them ill or extremely old – are in even worse condition, with their daily lives heavily disrupted and gravely endangered.

Under UN General Assembly Resolution 60/251, which established the Human Rights Council, members elected to the council “shall uphold the highest standards in the promotion and protection of human rights” and “fully cooperate with the council.”

As part of its 2020 campaign for election to the Human Rights Council, in January 2020 Russia published a position paper27 with a pledge to “ensure the protection of human rights and freedoms under international law and in strict compliance by States with their international human rights obligations”. Russia’s ongoing cooperation with the Syrian government in indiscriminate attacks over the civilian population and attempts to prevent impartial accountability in Syria; its military occupation of Crimea and ongoing human rights violations in Crimea and Donbas (Ukraine),its occupation of Abkhazia and South Ossetia (Georgia) and ongoing human rights abuses against etnic Georgians, do not fulfill the terms of the pledge.

Electing Human Rights Council members that are truly committed to improve and respect human rights is the responsibility of each UN Member State as provided in Article 8 of the UNGA resolution 60/251. Russia will be granted a seat at the Human Rights Council only because of its candidacy in a closed slate context without the much-needed scrutiny and challenge.

The undersigned organizations call upon the UN Member States to not vote in favor of Russia, in order to send a clear message that human rights violators undermine the UN Human Rights Council and that they are not legitimate members of the Council.