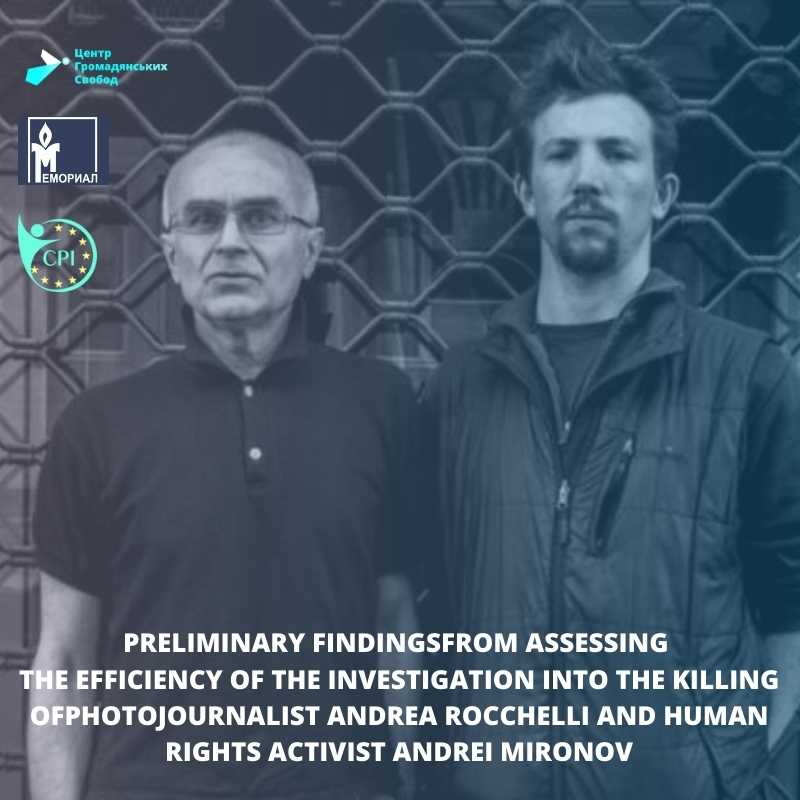 The Memorial Human Rights Centre (Russia) and the Centre for Civil Liberties (Ukraine) have set up an international task group to independently analyse the investigation into the death of Italian photojournalist Andrea Rocchelli, Russian dissident and human rights activist Andrei Mironov, and the wounding of French photographer William Roguelon on 24 May 2014 near Sloviansk. Vitaliy Markiv, a citizen of Ukraine and Italy, who participated in the fighting in Sloviansk in 2014, was sentenced in Italy to 24 years in prison in July 2019 on charges of committing this crime; the case is currently being appealed in Milan. The task group has invited international lawyers from the Centre de la Protection Internationale (France) to assess the progress of the trial. Below are some preliminary findings by the members of the task group, which were made public at a press conference held on 30 September 2020.

1. The task group studied the circumstances of the death of Rocchelli and Mironov, and the rules of law that law enforcement officers should have, but never used.

According to paragraph 168 of the 2016 Report on the Preliminary Investigation Activities of the International Criminal Court (ICC), ‘by 30 April 2014 the level of intensity of hostilities between Ukrainian government forces and anti-government armed elements in eastern Ukraine reached a level that would trigger the application of the law of armed conflict.’

Based on this, the investigation into the death of Italian photojournalist Andrea Rocchelli, Russian dissident and human rights activist Andrei Mironov, and the wounding of French photographer William Roguelon on 24 May 2014 near Sloviansk must be carried out with regard to the IHL treaties.

In the opinion of the international task group, Italian justice has failed to take into account the legal status of the armed conflict in eastern Ukraine or to follow the provisions of the IHL treaties when classifying the actions of the persons concerned; furthermore, it was selective and highly inconsistent when referring to them in the case files. Moreover, the fact was ignored that the accused had been a member of Ukraine’s regular armed forces, which guaranteed him functional immunity from prosecution in foreign jurisdictions, even despite the defendant’s dual citizenship. The issue of functional immunity should have been at least examined by the court.

2. The international task group continues to study the body of evidence on which the court relied in sentencing. Initial conclusions allow for the insufficient examination of the facts and the vague analysis methodology to be pointed out. The objectivity of the court’s findings also raises certain doubts.

The conformity to journalistic standards of an article by Ilaria Morani, the content of which is regarded by the investigation as evidence of a spontaneous admission of guilt, allegedly made by Vitaliy Markiv, and one of the key proofs of his guilt, is also doubtful. A number of factual errors, potential violations of journalistic standards as regards separating facts from comments, and the presence of disputed quotes that were never confirmed during the trial by either Markiv or witnesses, have been identified in the article.

Doubts also arise about the objectivity of the testimony given by the key witness, the French photojournalist William Roguelon, which was obviously influenced by the emotional shock suffered by him after being hit by shells, and the potentially insufficient mental training for working in the environment of the hostilities. The witness himself repeatedly mentioned in court that he had been awaiting death, which is also confirmed by the message sent to his colleagues that he had been bleeding and dying. At the same time, the case files show that he had suffered only minor shrapnel wounds to his legs and was able to walk unassisted.

It should be noted that, among them all, Andrei Mironov had the strongest military, expert, and journalistic experience. However, the court obviously underestimated his role in that particular situation and failed to take into account his last words recorded on the video during the battle shortly before his death, the essence of which is that they had been caught in the crossfire.

The court gave no assessment of the presence and possible participation in the gun battle of members of the armed forces commanded by Russian citizen Igor Girkin (Strelkov), the presence of which can be found directly at the place of the journalists’ death.

3. The international task group has analysed the coverage given to the trial in the Italian press and notes the accompanying negative public background that might have had a negative impact on the observance of the principle of the presumption of innocence.

The analysis of publications that had appeared prior to sentencing shows the following trends in the coverage of the trial:

General confidence in Vitaliy Markiv’s ‘presumption of guilt’: a number of publications claimed that Rocchelli’s ‘killer’ had been detained, without ever admitting that the suspect might be innocent.

Frequent use of clichés, stereotypes and misguided notions in respect to Vitaliy Markiv, Ukraine and Ukrainians, identification of Markiv, and Ukrainians in general, with the ultra-right forces, operating with erroneous data both in relation to Markiv (alleging, for example, that he commanded his combat unit) and the Ukrainian political system (such as allegations that ultra-right forces are widely represented in the Ukrainian Parliament).

The lack of balance in presenting the stance of the two parties in the trial, i.e. the killed and the accused: in the vast majority of instances, neither Vitaliy Markiv and his attorney, nor the Ukrainian authorities/embassy had been offered the opportunity to speak, and their position was largely ignored. In contrast, efforts by the defence were regarded as attempts to obstruct the administration of justice.

In the opinion of the international task group members, this public background could have made a significant impact on the outcome of the trial, where Vitaliy Markiv’s guilt was determined by the jury.

The Centre de la Protection Internationale (France) sent its representative on an independent monitoring mission, who was admitted to the courtroom. The international task group is expected to present the final report of its work by the end of October 2020.

All members of the international task group work pro bono. We are confident that our work is extremely important both for asserting the principle of justice in this case, and for commemorating the deceased photojournalist Andrea Rocchelli and our colleague, human rights activist Andrei Mironov.