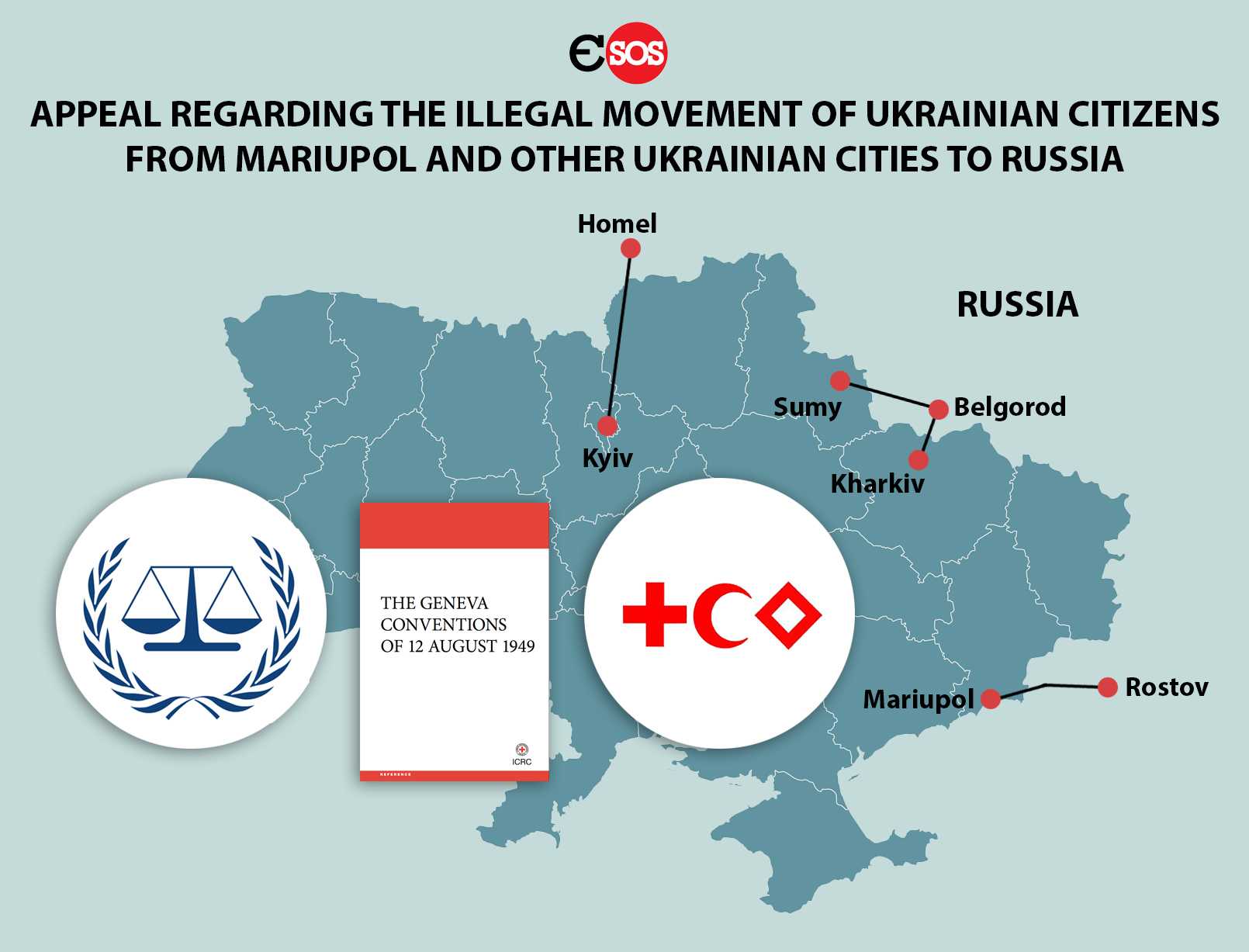 Following the Russian invasion of Ukraine on February 24, 2022, the city of Mariupol is surrounded by occupation forces and struggles under constant shelling. According to the local authorities, 80% of the urban infrastructure is destroyed resulting in an overwhelming humanitarian crisis.

Izyum, Volnovakha, Irpin, Ivankiv, Bucha, Gostomel, Chernihiv and other Ukrainian cities came under fire from the Russian army, which for several weeks has thwarted attempts by the Ukrainian side to deliver humanitarian aid and evacuate civilians. Instead, the Russian Federation commits war crimes in the form of illegal displacement of civilians from Mariupol, Volnovakha, Gostomel, etc. to the territory of the Russian Federation.

According to official records, this maleficent practice already affected a few thousand people from Mariupol, mainly from the city’s left bank. Relatives of the forcefully removed inform that many either lacked IDies or the documents were confiscated. Affected people are relocated against their will to Russia directly or to the temporarily uncontrolled territories of Crimea or the Donbas region. These acts of aggression against civilians are accompanied by an intense disinformation campaign claiming that Russian forces now control several Ukrainian cities in the area, and other government-controlled cities refuse to take in refugees.

There are numerous reports of Russian filtration camps for forcefully relocated Ukrainian civilians to be settled in distant regions of the Russian Federation. One of such camps is already operating in Dokuchaevsk of the Donetsk region. Russian Federal Security agents interrogate the prisoners if they have relatives serving in the Ukrainian army or police.

The actions described above directly contradict the provisions of article 49 of the IV Geneva Convention Relative To The Protection Of Civilian Persons In Time Of War of 12 August 1949. Additionally, the actions mentioned above violate the provisions of Article 85 of the Protocol Additional to the Geneva Conventions of 12 August 1949, relating to the Protection of Victims of International Armed Conflicts (Protocol I), and other commonly accepted provisions of the International Humanitarian Law.

Moreover, the forceful relocation of civilians cannot be treated as an evacuation since the Russian Federation did not occupy or control Mariupol prior to these events. Even in a case of forced relocation of civilians on temporary occupied (by Russia) territories, the actions on behalf of Russian forces are still in direct violation of the established norms of the International Humanitarian Law because: 1) civilians are relocated outside of the occupied regions without any appropriate military or humanitarian justification, people are moved to the remote Russia regions to “bolster economy”; 2) the confiscation of IDs and other documents signifies that relocation is not temporary because Ukrainian civilians will not be able to return; 3) the Russian occupation forces separate families, take away mobile phones and force people to work under duress; 4) Russia continuously refuses to establish safe passages to allow civilian population to evacuate from besieged cities to safe locations controlled by Ukrainian government; 5) according to numerous records, Russian forces opened fire on civilians fleeing war zones to safer regions controlled by Ukrainian government. These actions clearly indicate that Russian forces commit war crimes in direct violation of Article 8 (2)(b)(viii) of the Rome Statute of the International Criminal Court.

On March 24 the International Committee of the Red Cross contacted the Ministry of International Affairs of the Russian Federation with the plan to open a new office in Rostov-on-Don, Russia.

It is our firm belief that if such an office of the International Committee of the Red Cross is on the territory of Russia, its main goals should be the protection of the rights of Ukrainian civilians illegally relocated, prevention of further transportation of Ukrainian civilians to the remote areas of the Russian Federation, helping relocated civilians to restore legal documentation, contact their relatives, and return to Ukraine.

We would like to draw additional attention to the role of the ODIHR, OSCE, the Permanent Council of the OSCE in Vienna, the European Commissioner for Human Rights, monitoring mechanisms of the European Council, the relevant regional initiatives and mechanisms of the UN, the United Nations Human Rights Council, The Office of the United Nations High Commissioner for Human Rights, and the International Committee of the Red Cross to use all available mechanisms and means to protect Ukrainian people who were forcefully relocated to the Russian Federation, and to ensure that Russia abides by the norms of the International Humanitarian Law.

To join the list of signatories of this appeal, please fill out the following form.

Signatories in an individual capacity: