The Appeal to the Members of the European Parliament by the Families of the Prisoners of the Kremlin and the Euromaidan SOS Initiative, Which Conducts the LetMyPeopleGo Campaign to Release Them 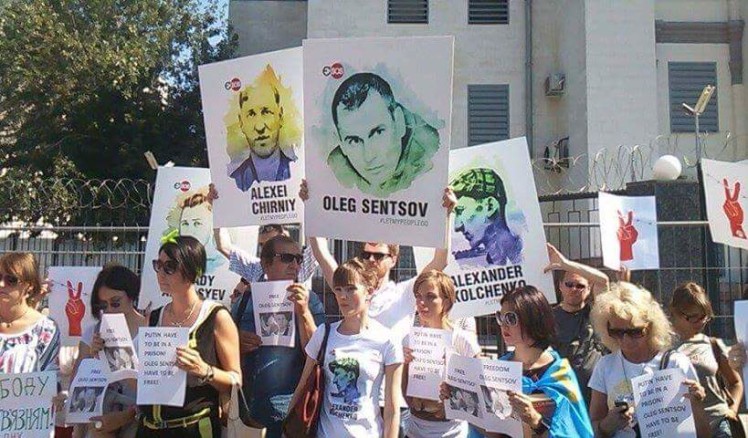 The Appeal to the Members of the European Parliament by the Families of the Prisoners of the Kremlin and the Euromaidan SOS Initiative, Which Conducts the LetMyPeopleGo Campaign to Release Them

Dear Members of the European Parliament,

We, members of families of the Ukrainian political prisoners in Russia and the occupied Crimea and the Euromaidan SOS initiative, which conducts the LetMyPeolpeGo campaign to release them, appeal to you and hope to be heard.

We have been fighting for the liberation of Ukrainian citizens, who were jailed in Russia on trumped-up criminal charges, for 3 years. During this time their number is growing steadily, and now totals at least 44 people. Among them are the film director Oleg Sentsov, recognized by Amnesty International as a prisoner of conscience, the human rights defender Emir Usein Kuku, the journalist Roman Sushchenko, Deputy Chairman of the Majlis of the Crimean Tatar People Ahtem Chiygoz and many others.

Anti-extremism and repressive anti-terrorism legislation of Russia provides ample opportunities in dealing with dissent. Technology of persecution is perfectly worked out. Immediately after the arrest an isolation policy is applied to the detained person. The Ukrainian Consul may not be allowed to visit the arrested for months. The independent counsel chosen the family may be wrongly denied access to the client. And the detained person may be applied torture to coerce confessions to crimes he or she did not commit. The forced incarceration of those arrested in the Crimea without a court order in the mental hospital for up to 28 days, where the interrogation continues in the absence of their lawyers, takes place.

This year the occupation authorities in the Crimea started demonstrative arresting lawyers of political prisoners and people who did the prison visits. This means that the barometer of freedom in the occupied Peninsula reached its critical point and requires immediate response from the international community.

In authoritarian Russia there is no fair justice. The only chance for our families to go home and stop the growth of political repression in the occupied Crimea is to increase international pressure on Russia, which demonstratively ignores the principles of international law.

Given the above, we appeal to you with request to include into the text of the resolution “Ukrainian political prisoners in Russia and on the situation in Crimea” the following provisions:

1. To introduce a new type of the European Union sanctions against Russia for massive human rights violations in the occupied Crimea;

2. To appoint a special representative of the European Union on the occupied Crimea and Donbas for constant monitoring the situation of violation of human rights in the Ukrainian territories under the effective control of the Russian Federation;

3. To start anti-corruption investigation in the member countries of the European Union with the aim of identifying dirty money and political ties of the top management of the Russian Federation that conducts a deliberate policy of human rights violations to preserve the authoritarian regime;

5. To demand from the Russian Federation to stop the practice of political persecution and immediately to release Ukrainian citizens, political prisoners in Russia and occupied Crimea, and until that time, to respect the fundamental rights and freedoms, in particular freedom from torture, the right to an effective remedy, right to a fair trial, etc.;

7. To organize a mission with the involvement of independent medical experts to places of detention of citizens of Ukraine, who are prisoners for political reasons in the Russian Federation and the occupied Crimea, to monitor the conditions of detention and state of health;

8. To create an operational working group to form a list of persons involved in the fabrication of criminal cases against the Ukrainian citizens, who are prisoners for political reasons in the Russian Federation and Crimea and introduce personal sanctions against them.

We, the undersigned, members of families of the Ukrainian political prisoners in Russia, confirm mass violations of fundamental human rights and freedoms, prosecution and other methods of pressure on dissidents, specified in the appeal to the European Parliament.