Such meetings are beneficial for all participants 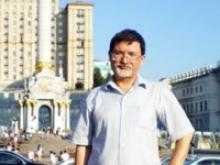 Azerbaijani human rights activist and director of the Human Rights Center of Azerbaijan (HRCA), Eldar Zeynalov summed up ended in Kiev workshop on exchange of experiences and best practices “Improving skills in the field of human rights advocacy (promotion and protection of human rights).”

According to the head of the OCA, the seminar was attended by five representatives of Azerbaijan. “Except for me, their participation in the seminar later unveiled a lawyer Fariz Namazly. The names of the other three parties, I do not know if I can make public.

Organizers asked not to mention the names of the participants without agreement with them. I can only say that the two human rights defenders, and three lawyers participated from Azerbaijan. “

Recall that the seminar held in the capital of Ukraine on 4-5 June, organized by the Netherlands Helsinki Committee and the Helsinki Foundation for Human Rights (Poland) for the human rights of a number of countries of the former Soviet Union, including Azerbaijan.

For two days, the participants discussed the planning and advocacy strategy (promotion and protection of human rights), including working with international organizations such as the UN, Council of Europe, the European Union and the OSCE, as well as exchanged between human rights defenders from different countries with innovative approaches to this area.

According to the expert, such events often performed earlier. It was the general training, and explain the ways of European standards, and so on.

“This workshop was more specific. Standards as they were, and have remained so, just change the working conditions. They exchanged views on how to operate in such conditions, how to achieve positive changes in human rights issues.

We never work in isolation. We have partners in the West, that we support or do not support. Which have their own vision of the situation in the country and is not always correct and complete. And the result is that some campaigns in our defense, wrong calculation, not the tone chosen, the methods used do not become “blank shot”, as he was selected.

And for “Westerners” to us useful to meet. It is mutually useful meeting. The workshop in addition to representatives of Azerbaijan, Russia, Belarus and Kazakhstan, was also attended by representatives of immigrant organizations in France.

But in fact, they work in the Russian direction. I became more optimistic look at things and know what are the conditions for human rights defenders in Belarus, Russia.

In the same Russian clamped and dissidents, and human rights activists. They are looking for other outlets. Nobody is going to give, “- said E. Zeynalov.

Note that at the time of the seminar, after a brief lull, resumed again fighting in eastern Ukraine between the forces of the anti-terrorist operation and separatists.

According to E. Zeynalov, “in the city met the guys in camouflage, the number of police officers was greater than that observed a couple of years ago.”

“However, such as in Russia, where visitors to the carp, check documents, did not exist.

It is not felt that Kiev – the capital of the belligerent State. In the city center, where the Maidan, traces the events of last year. The same House of Trade Unions has not been refurbished. Many graffiti that were made then.

In a couple of places monuments installed. Sometimes came a beautiful girl who collected donations for the wounded. Only in this war, and manifested. No aggressive slogans on the wall, sometimes there are signs saying: “Ukraine – one country, one nation.” No militarist propaganda personally I have not seen “- he said.