One year after her death, the question remains: Who killed Kateryna Handziuk? 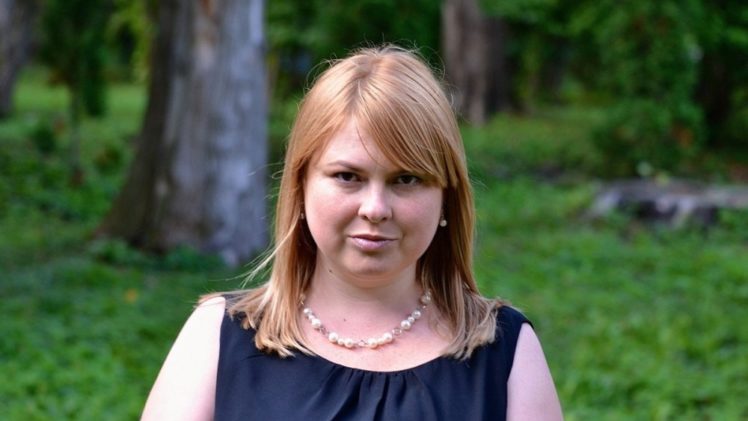 Who was behind the killing of Kateryna Handziuk? Even after the sentencing of five men who admitted to attacking the 33-year-old Ukrainian activist with acid, inflicting injuries from which she died in hospital three months later, this question remains unanswered.

Kateryna Handziuk was an adviser to the mayor of the Black Sea port city of Kherson, who had made a name for herself as a civic activist. While still a student at Kherson University, Kateryna joined former Prime Minister of Ukraine Yulia Tymoshenko’s ‘Fatherland’ party, becoming the leader of its local youth wing and in 2006 she won a seat for the party in the Kherson regional council.

The following year, she took part in the Euromaidan uprising against then president Viktor Yanukovych. After the annexation of Crimea by Russia and the onset of the war in eastern Ukraine, Handziuk collaborated with the UN High Commission for refugees to help children displaced by the war. During the local elections in 2015, she helped the acting mayor of Kherson, Volodymyr Mykolayenko, win the election, and the following year was named as the acting manager of affairs at Kherson City Council’s executive committee.

All the while, alongside her professional role the civic administration, Handziuk led a tireless crusade to expose endemic corruption in the local government and police force, publishing her investigations on social media and on ‘MOST’ the citizens’ journalism website she co-founded in 2012. As a result, she became a recognised face in the fight against cronyism, graft and impunity that flourished during the administration of former president Petro Poroshenko. It also made her a long list of powerful enemies.

She had become accustomed to receiving threats and being followed by security services, so it would not have struck her as anything out of the ordinary, if on the morning of 31 July 2018, she noticed two men lurking outside her apartment building as she made her way to the car waiting to take her to work. In the attack that followed, one of the men through a litre of concentrated sulfuric acid over her head, causing severe burns to 40 percent of her body. If the intention behind the attack had been to silence Kateryna, it backfired badly. Apparently, her attackers had underestimated her resolve: not only did she survive the initial attack, but she was speaking out from hospital bed, giving interviews, even naming names. Her defiance in the face of her would-be assassins was further reinforced by an active group of friends and supporters who mobilised a headline-grabbing Facebook campaign to focus attention on the case and ensure that it didn’t end up being shelved and forgotten about like so many attacks against journalists and activists in Ukraine.

“Our under-reformed state machine works only when forced to,” Oleksandra Matviichuk, head of the board of the Center for Civil Liberties told EU-OCS.

“Only direct public attention to the case can guarantee a result. In practice, even high-profile cases get dropped from the agenda after some time passes. But this is an entirely different case. Friends and colleagues of the deceased united under a powerful initiative called “Who ordered [the death] of Kateryna Handziuk?” They won’t let this case slide,” Matviichuk said.

Kateryna and her supporters’ doubts about the level of professionalism they could expect from the police investigation were confirmed early on when an apparent breakthrough led to the arrest of 40-year-old Kherson resident Mykola Novikov. Despite several witnesses affirming that Novikov was on vacation with his family at a seaside resort about 100 km from Kherson at the time of Kateryna’s attack.

Kateryna herself said she didn’t recognise him as her assailant.

Regardless, the judge agreed to the prosecution’s request to hold Novikov in preventive detention for 60 days. It was at this stage that the unofficial investigation kicked into gear. Carrying out basic police work neglected by the police themselves, such as corroborating the suspect’s testimony with witnesses, Kateryna’s friends were able to prove that Novikov was indeed on vacation and couldn’t possibly have been responsible for the attack. Faced with irrefutable evidence, the authorities were forced to release Novikov two weeks later.

During interviews with Kateryna in hospital she expressed her complete lack of faith in the investigation being carried out by the local Kherson police, whom she suspected of being in the pay of the people responsible.

Since then there has, in a sense, been two parallel investigations, one led by the authorities themselves focusing on who physically committed the crime, and another led by justice campaigners focusing on who commissioned it. The former line of investigation led to the arrest of five men, all members of a Ukrainian volunteer battalion who admitted their guilt, saying they thought they were attacking a pro-Russian corrupt official and that they only expected to injure, not kill her. The leader of the group, Serhiy Torbin, was sentenced to 6.5 years, while Mykyta Hrabchuk, who was guilty of throwing the acid on Kateryna, received six years. Volodymyr Vasianovych and Vyacheslav Vyshnevsky, who provided transport for Hrabchuk to carry out the attack, received 4 years each. Viktor Horbunov, who bought the acid but didn’t take any further part in the crime, received 3 years. According to the investigation, Torbin received money from those who commissioned the attack and paid his accomplices between from $300 to $500 each.

The lenient sentences have only deepened the sense of disillusion among her supporters.

“These five people get a very light sentence – 3 to 6 years for a horrible murder. Our friend died during 96 days. experiencing most terrible suffering. And these men got the sentence that one gets for robbing someone of a mobile phone,” Oleksii Kovzhun of the Who Ordered the Killing of Kateryna Handziuk Facebook group told EU-OCS.

Oleksandra Matviichuk, head of the board of the Center for Civil Liberties, called the sentences “ridiculous” adding that they made a deal with the prosecution in return for testimonies, but “nobody knows what was in those testimonies”.

Meanwhile the informal investigation continued apace, following leads put forth by Kateryna herself during interviews she gave just weeks before she died. From her hospital bed she had named a number of people from the Kherson regional administration with whom she had recently crossed swords and she felt were capable of ordering a hit on her life as a result.

Kateryna said she had a long-running conflict with Vladislav Manger, who she said was angry with her over a documentary she made in which she alleged that he had used bribery and intimidation to become the head of Kherson Regional Council. Manger subsequently sued Kateryna and the colleague with whom she made the documentary, losing the case in the high court.

“I think the most painful thing (for Manger) was losing his case in the Supreme Court, which ruled the facts in the programme made about him a year ago were true,” Kateryna said in the interview.

“Manger has a criminal circle, who could carry out such a crime…they could even give it as a gift to him,” she added.

Kateryna’s father Viktor and her friends later named Andriy Gordeev, then Kherson Oblast governor; and Yevhen Ryshchuk, then Gordeev’s deputy, of also possibly ordering her death. What connected all of these men to Kateryna was her outspoken comments about a fire that ravaged 600 hectares of Oleshky forest outside Kherson. In a number of Facebook posts she had charged that the fire had been started on purpose as part of an illegal logging operation from which Ryshchuk and Manger sought to profit. None of this could have been plotted without the go ahead from Gordeev, their accusers allege.

All three men deny the accusations.

However, there was apparently enough in them for investigators to officially name them as suspects. In February 2019 investigators questioned Yevgeny Ryshchuk but let him go saying that although there was some evidence to connect him to the illegal logging, it was not enough to bring charges. Manger, on the other hand, was arrested in February, but released the same day after paying the $96,000 bail.

Whatever optimism Manger’s arrest had brought for Kateryna’s friends and family was short-lived however, as first the charges against him were reduced from ordering Kateryna’s murder to causing her grievous bodily harm resulting in her death. A further, possibly terminal blow, to the case against Manger was delivered in July when the Prosecutor-General’s Office announced that the probe into the politician was to be suspended indefinitely. The reason given was that Manger’s co-accused, Oleksiy Levin, who is suspected of acting as the middleman between Manger and the five men guilty of perpetrating the attack, had fled the country and therefore wasn’t available for questioning. Manger has returned to work as the head of Kherson Regional Council.

With Levin’s whereabouts unknown and little prospect of him resurfacing to face investigators in Ukraine, there is now a real fear among campaigners that justice may never be seen for Kateryna. According to her supporters, the maze of dead ends that has characterised the case to date is proof of the “corrupt system of regional power [that] protects its own, so all three suspects are feeling quite safe from prosecution.”

In May, political outsider Volodymyr Zelensky shocked the world when he won the Ukrainian Presidential elections by a landslide. He consolidated the political upset when his Servant of the People party won an outright majority in the parliamentary elections in July. Asked if they thought this could mean that the corrupt system of power ‘that protects its own’ and murders those like Kateryna who have tried to challenge it, might finally be held accountable, Handzuik’s friends say they are cautiously optimistic.

“During times of changes there is certainly a possibility of getting justice,” they say, but in the meantime, they have no intentions of letting up the pressure.

“We are a long way from victory. We have to see not only all the perpetrators of this crime in jail – as well as all those policemen and state prosecutors who tried to cover the crime. We have to ensure that it cannot happen in the future. We owe it to Katya; we owe it to Ukraine.”