How to improve situation in Crimea? Answers can be found at Book Arsenal fair 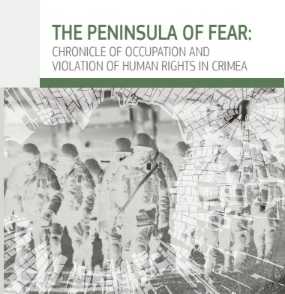 The international community should strengthen sanctions against Russia because of flagrant violation of human rights in Crimea.

This was said by Chairwoman of the Center for Civil Liberties Oleksandra Matviychuk during presentation of the book “The Peninsula of Fear: Chronicle of Occupation and Violation of Human Rights in Crimea” at the Book Arsenal fair in Kyiv. “It is necessary to appeal to the international organizations with the request to strengthen the sanctions for Crimea. If the occupying power violates the current international humanitarian law, which guarantees the population of the occupied territory a number of rights and freedoms, the sanctions must be intensified. They would give Russia a signal that such actions cannot go unpunished and may cost it dear. I sincerely believe that only diplomatic efforts multiplied by the strength of the economy can produce a cooling effect on the Russian de facto authorities in Crimea. Otherwise, we will continue observing how it easily and flagrantly ignores any resolutions of international bodies, reports of international organizations, etc.,” the Human Rights Information centre quotes the human rights activist as saying.

Oleksandra Matviychuk, the co-author of the book, outlines three institutional factors in deployment of large-scale and systematic reprisals in Crimea.

The first such factor is illegal introduction of Russian legislation.

“It is repressive in itself, it violates a number of international human rights standards. However, it is not enough for Russia. We have seen, since the onset of aggression, how specific areas of law (anti-extremist, anti-terrorism) have been even more “improved’,” the human rights activist said.

In May 2014, the amendments to the Criminal Code came into force, which introduced a new corpus delicti – “public appeals for violation of the territorial integrity of the Russian Federation.”

“This article is hanging over a number of bloggers, journalists, activists and ordinary people on the peninsula as a sword of Damocles,” Oleksandra Matviychuk said.

According to the expert, the second factor in the institutional system of reprisals is large-scale targeted defamation campaign aimed at dissidents and activists. After all, such people in Crimea are called fascists, Bandera followers, radicals.

“This is eloquently reflected even in the title of the book – ‘The Peninsula of Fear’. This is not a metaphor. If a leaflet, which calls on the neighbors to address the FSB regarding other neighbors who have pro-Ukrainian views, is hanging at the entrance of your house, you live in the atmosphere of fear,” the human rights activist noted.

She also points to a number of repressive tactics and tools implemented in the territory of Russia as the third institutional factor, namely the blocking of websites, automatic removing of information from communication channels.

“Repressive legislation, defamation campaigns and repressive practices have formed systematic and large-scale well-organized reprisals that have penetrated into all spheres of public life on the peninsula. The arsenal of these reprisals is wide. We have many cases indicating extralegal methods: enforced disappearances, torture, beatings. Over the past year, the so-called legal mechanisms aimed at reprisals had strengthened. The trumped-up criminal and administrative cases, prohibition of peaceful assemblies, re-registration of legal entities, religious organizations and many other things which have become the daily reality for people living in the occupied peninsula,” Oleksandra Matviychuk said.

Currently, there are 28 people on the list of #LetMyPeopleGo campaign. The human rights activists see the political implications in the cases against these people. Of them, 22 people were arrested in Crimea, 13 people are Crimean Tatars. The human rights activist points to the practice of forced transfer of Ukrainians to Russian territory in violation of the international law.

“The risk group covers all people who do not support the annexation of Crimea. Yuri Ilchenko is now in a remand prison for ‘a call for separatism.’ He is an ordinary person, a school principal. His fault was that he posted a message not supporting Russian annexation of Crimea in social network. He faces up to four years in prison. This is absolutely a real threat, because another activist is serving term on similar charges in Tatarstan,” Oleksandra Matviychuk noted.

She added that people, who exercised their civil rights and liberties, also belonged to the risk group.

“We can cite a lot of different examples of how the peaceful assemblies are prohibited, preventing journalists from covering events. However, in fact we saw wider effects of repressive legislation in 2015. People with even pro-Russian views begin to experience repressive actions. For example, about 100 farmers gathered near the ‘Council of Ministers’ in Simferopol on March 7 to hold the socioeconomic rally. On the same day, the occupying power banned all protest actions for an indefinite term,” the human rights activist said.

The Crimean Tatar people belong to the third risk group, she believes.

“The representatives of the indigenous population have faced all kinds of persecution, including murder. We are now at the new stage of reprisals as the representative body of the Crimean Tatar people, the Mejlis, has been banned. The self-proclaimed Crimean prosecutor suspended the activities of the Mejlis not even waiting for the court ruling. This entails a number of consequences. Anyone who cooperates with the Mejlis now may be sentenced to four years in prison. The only evidence in such a case would be ‘links with the Mejlis extremist organization’,” the human rights activist said.

The book “The Peninsula of Fear: Chronicle of Occupation and Violation of Human Rights in Crimea” contains the history of human rights violations in Crimea within 2015 – early 2016 and the international legal instruments relating to the situation in Crimea, etc.