Aggression towards People with “Unusual” Appearance on the Rise in Crimea 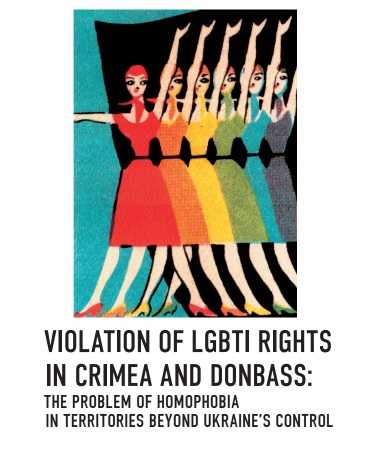 After Russia’s annexation of Crimea in 2014, intolerance towards LGBTI community escalated, with attacks becoming more frequent. In addition, people with any kind of unordinary appearance, whether it be the hairstyle, clothes, jewelry, etc. have also started to be harassed.

This was stated in the report “LGBTI rights violations in Crimea and Donbas: homophobia in the territories beyond the control of Ukraine”, which was prepared by the Anti-Discrimination Centre Memorial with the support of the Center for Civil Liberties. According to the report, many members of the LGBTI community perceived Crimea’s annexation as a tragedy: it meant the spread of homophobic norms perpetuated by Russian legislation and discriminatory practices into Crimea.

In particular, this concerns a statute that amended Russia’s child protection law and the Code on Administrative Offenses, also known as the “gay propaganda law”. This amendment made “promoting non-traditional sexual relationships” an offense.

Thus, the day when Crimea was declared a part of Russia was perceived as a turning point by the LGBTI community, after which it was largely impossible to express themselves in any way.

The consequence of this, as one respondent from Crimea described, was “a profound insularity of LGBTI after the ban came down on ‘propaganda’ of same-sex relationships.”

According to one testimony, Crimean society has changed under the influence of Russian homophobic propaganda. Due to governmental promotion of homophobia, hate groups have moved from threats to violence.

According to one respondent, in spring of 2014, his “friend was caught when he was going home. He was beaten, while the attackers shouted homophobic remarks. He went to hospital with a head injury and broken ribs. The parents went to the police, but did not say why he was beaten. No one found anyone. No one really looked.”

After the summer of 2014, when Russian nationalists left Crimea, the level of homophobia did not decrease.

Crimean LGBTI individuals also say they are “quite often beaten in the streets.”

They report that, in general, there is higher intolerance towards gay men: “The aggression starts immediately when they see two guys together, often they do not react like that to women, but they rush to beat men.”

“I was walking with a friend in a park and he took me by the hand. A group of people approached us. They began to attack us and shouted homophobic words. After that, I became more afraid”, said one resident of Crimea.

In 2015, a “gay couple was walking together, they were beaten when it was noticed that they were holding hands.” After the attack, they left Crimea.

In October 2015, a gay couple was attacked by six men in a park. As a result, of one of the gay men fell into the river and sprained his arm.

Women often face homophobia in Crimea, too. One of them spoke about what happened in spring of 2016: “I was approached at work and started to be humiliated. They confused me with a guy, and were saying homophobic phrases”.

Hate speech quickly turns into violence against women. “I was renting a room. Some guys who knew about my orientation and did not like it came to the owner. They rushed in and I got hit in the face,” says a female victim.

Aggression is faced not only by the LGBTI, but also those who are considered to “look” like LGBTI in one way or the other, or are suspected of being one of them.

Crimeans claim that “even guys with informal hairstyles have started receiving homophobic insults.” Respondents described typical cases of homophobic aggression related to the victim’s appearance. For example, in April 2016, there was an attack on one guy because “he was just wearing an earring.”

Most of the described attacks have been performed by “ordinary” citizens who have prejudices against people from a different Sexual Orientation and Gender Identity (SOGI) group. But there are also homophobic groups who track LGBTI in the streets and on the Internet. The Occupy-Pedofilyay movement, for example, was active in Crimea.

LGBTI remaining in Crimea say that “people are tracked down and found through social networks.” Some were invited on bogus dates, then beaten and humiliated when they arrived. These attacks were often filmed. There is a case when a gay man was tracked down and attacked at his home. After the attack, he and his partner left Crimea.

LGBTI also point to homophobic aggression on the part of some representatives of the Muslim community: “They started to react very aggressively … [and] were attacking LGBTI”.

One woman says that when she “communicated with a Crimean Tatar, he was talking about how they were trying to slowly track LGBT though fake pages on social networks.” When he learned that she was a lesbian, he started threatening her on the phone and on social networks. In summer of 2015, he wrote to her: “I’ll find you, slaughter, kill, and rape your girlfriend.”