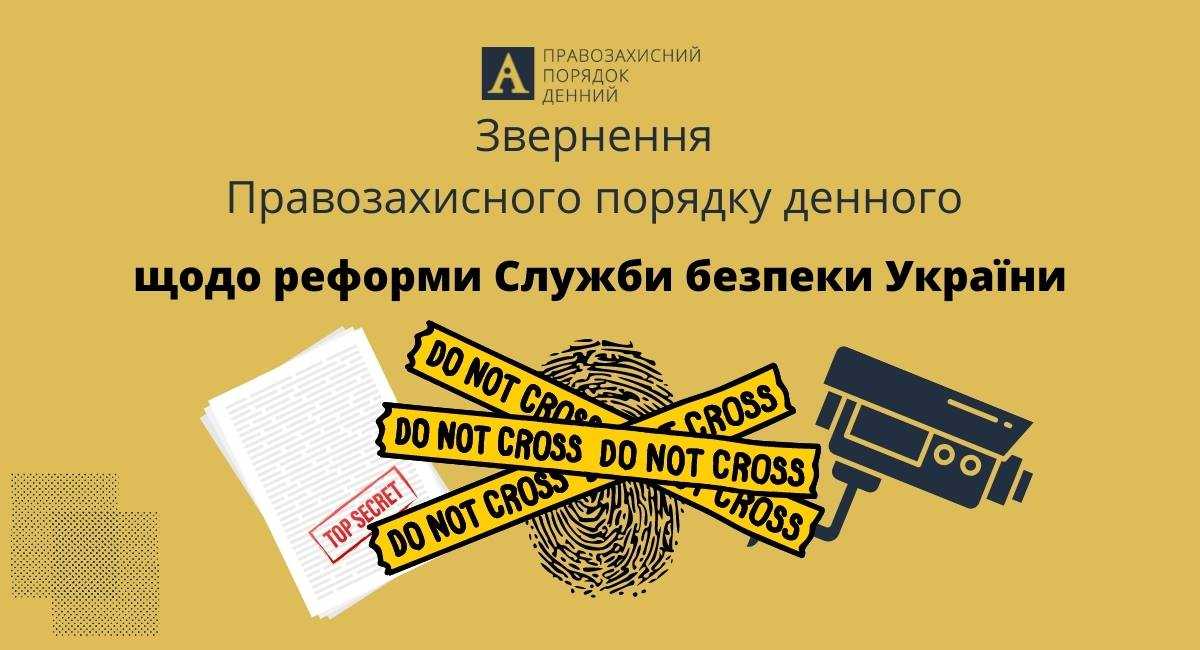 by the Human Rights Agenda Platform

The draft law on the Security Service of Ukraine has been under consideration in the Parliament for over a year now, and the law has been recently prepared for its adoption. However, due to numerous comments, some of its provisions may still be reviewed before it is voted by the Parliament.

Human rights NGOs and other public organizations are ready to support the draft law on the SSU if the specific remarks mentioned in this appeal are included in it, as without changes, these norms directly violate European human rights standards and the requirements of the Constitution of Ukraine.

Since the registration of this bill, we openly opposed it, on the grounds that it did not have much in common with the stated goals of the intelligence service reform, but only excessively expanded its uncontrolled powers. However, especially in the last month, the draft has changed significantly for the better. In our opinion, the authors of the project are really trying to consolidate the main principles of the SSU reform:

1) The SBU should be deprived of functions that are not inherent to the special services, in particular, investigative functions. The secret services have more responsible functions than looking for those guilty of committing certain offenses, especially when these crimes have little to do with state security.

2) Accordingly, the SSU should be deprived of the law enforcement powers granted to it to investigate such offenses.

3) It is necessary to introduce effective independent control over the broad powers of the secret service, which should include significant expansion and strengthening of parliamentary control through a special committee, a more clear definition of the President competencies to control SSU, and requirements for annual public reporting of the secret service.

The provisions of the draft law do not always embody these basic principles, sometimes the provisions are too general and vague. However, it should be recognized that the reform of the SSU will largely depend on the political will of the President, Parliament and the SSU itself, and therefore even perfect provisions may remain unfulfilled. Therefore, this draft may be the beginning of the long-awaited reform of the SSU, although its implementation will fully depend on the procedures and mechanisms that the project does not clearly define. Unfortunately, the draft law also does not clearly define the content of many powers of the SSU, the grounds and procedure for their use. This poses many possible threats to human rights violations in the future.

Therefore, we are ready to support the draft of this law, because it finally gives the opportunity to start this reform.

However, certain provisions of the draft law still need to be reviewed and finalized in order to protect human rights, as they directly contradict international law and the Constitution of Ukraine.

In particular, in our opinion, the project needs to change:

1) Clause 2 Paragraph 1 Article 13 of the draft law. It is our firm belief that no secret service of democratic countries can receive any information free of charge from all private or public entities. The SSU can only request information, but there should be no obligation for private entities to provide it, especially when it is not a criminal investigation. In democratic states, such powers of the intelligence service are divided into at least two separate procedures:

2) P. 3 Art. 13 violates the requirements of Art. 8 of the European Convention on Human Rights on the use of equipment for interception of information from communication channels, as such a procedure for identified suspects should be carried out exclusively for the investigation of crimes and not for the collection of operational and official information. In this version, the draft law allows to “listen” to almost any person in the country without any grounds and guarantees of abuse of this right. This provision directly violates the requirements of Art. 31 of the Constitution of Ukraine, which establishes the need to obtain a sanction and limits these procedures exclusively to criminal proceedings.

3) P. 3 of Art. 13 contains provisions on access to all databases, which do not even have intelligence services in many authoritarian countries, and in democracies, such powers are not applicable at all. They violate existing international standards for the protection of privacy and personal data. In view of this, the following powers should be completely excluded from the draft law:

“To obtain information, the Security Service of Ukraine may use:… direct access to automated information, reference, systems, accounting, registers, banks or databases, the holder (administrator) of which are law enforcement agencies, government agencies, local governments, enterprises, institutions and organizations of any form of ownership, as well as to receive from their copies of information funds of these systems with their updating in real-time.”

We want to highlight that according to international human rights standards, private entities are obliged to provide only information that is necessary for the investigation of a specific criminal case, and certain information can be provided only by court decision.

Accordingly, it is necessary to delete in paragraph 17 of the Final and Transitional Provisions of the draft law; and clause 8 of P. 1 of Art. 15 of the amendments to the law on combating terrorism to delete paragraph with a similar wording that provides access to information systems held by non-state actors.

4) P. 4 Art. 13 should be amended, as the specified information of telecommunications providers is a general common concept of “secrecy of correspondence”. Art. 31 of the Constitution of Ukraine clearly stipulates that this information may be provided only by a court decision in order to prevent the commission of a crime or to investigate a crime.

5) C. 19 P. 1 Art. 11 of the draft law. In fact, this provision allows SSU agents to stop any person and to inspect and inspect his or her belongings and vehicles for any reason without concrete stipulations. The SSU cannot have this power, as they can only belong to law enforcement agencies. A special problem of this provision is that the verification of documents, an inspection of persons and things is allowed not even to investigate offenses. No substantial grounds are required for this, which contradicts the requirements of Art. 8 of the European Convention on Human Rights.

6) Delete C. 7 P. 1 Art. 11 of the draft law and  P. 14 of the Final and Transitional Provisions of the draft law that amendments the law “On counterintelligence activity”. Delete C. 35 P. 2 Art. 7 and C. 2 P. 8 Art. 82, which defines the right of the SSU to block resources on the Internet and the obligation of telecommunications operators to install appropriate equipment that will provide full automatic access to the SSU officials. Since 2003, the SSU has been seeking to have these powers. However, the secret services of no other democratic countries have such powers. Even in authoritarian countries, these powers often belong to other separate services. In a democracy, intelligence agencies can influence decisions to restrict access to resources in various ways, but these decisions are implemented exclusively by telecommunications operators themselves. The use of equipment enables the SSU to intervene directly in the telecommunications network, establishes a system of total surveillance of users and contradicts numerous international norms on the protection of citizens privacy.

The debate over this bill has often revolved around two important values: security and human rights. There were many arguments in favor of a stronger intelligence service in connection with the Russian armed aggression. In times of war, the value of security certainly needs special protection, but it is important not to lose focus on human rights and to find an appropriate balance between them.

In many post-Soviet states, strong and uncontrolled special services have become the main tool of authoritarianism. Therefore, it is important to lay down effective precautionary tools in the SSU reform to preserve freedom. In fact, these goals do not contradict each other, and the examples of many countries have shown that the protection of freedom can go hand in hand with the protection of state security.

The comparative table of the draft law before the second reading is available on the website of the profile Committee of the Parliament: https://w1.c1.rada.gov.ua/pls/zweb2/webproc4_1?pf3511=70243

Center for Civil Liberties recognizes the value of the cross-sector cooperation approach and uses it in its activities. When implementing the activity CCL united efforts of experts, academic researchers, members of Parliament and NGOs around common goals. Close cooperation of the platform members enables us to conduct joint advocacy work to the highest standard possible.

The “Human Rights Agenda” focused on the law enforcement agencies reforms, the Security Service of Ukraine, judicial reform, the institution of the Parliamentary Commissioner for Human Rights, implementation of international law in Ukrainian law, including ratification of the Council of Europe Convention on preventing and combating violence against women and domestic violence (Istanbul Convention), the Rome Statute of the ISS, and the adoption of a bill on war criminals (bill №2689, CCL advocacy campaign succeed, the law was adopted on 20 May 2021).

The participants of the Platform are the Ukrainian Helsinki Human Rights Union, Kharkiv Human Rights Group, Amnesty International in Ukraine, the ZMINA Human Rights Center, the Center for Law Enforcement Research, the Without Borders Project, Euromaidan SOS and others. The work of the platform is coordinated by the Center for Civil Liberties.

The appeal was signed by:

Center for Democracy and Rule of Law

The Association of Ukrainian Human Rights Monitors on Law Enforcement

Odesa Regional Organization of the Committee of Voters of Ukraine