Paris-Geneva-Manama, 29 August 2018 – For the second time since 2013, the United Nations (UN) Working Group on Arbitrary Detention (WGAD) has issued an Opinion regarding the legality of the detention of Mr. Nabeel Rajab under international human rights law. In its second opinion, the WGAD held that the detention was not only arbitrary but also discriminatory. The 127 signatory human rights groups welcome this landmark opinion, made public on 13 August 2018, recognising the role played by human rights defenders in society and the need to protect them. We call upon the Bahraini Government to immediately release Nabeel Rajab in accordance with this latest request.
In its Opinion (A/HRC/WGAD/2018/13), the WGAD considered that the detention of Mr. Nabeel Rajab contravenes Articles 2, 3, 7, 9, 10, 11, 18 and 19 of the Universal Declaration on Human Rights and Articles 2, 9, 10, 14, 18, 19 and 26 of the International Covenant on Civil and Political Rights, ratified by Bahrain in 2006. The WGAD requested the Government of Bahrain to “release Mr. Rajab immediately and accord him an enforceable right to compensation and other reparations, in accordance with international law.”

This constitutes a landmark opinion as it recognises that the detention of Mr. Nabeel Rajab – President of the Bahrain Center for Human Rights (BCHR), Founding Director of the Gulf Centre for Human Rights (GCHR), Deputy Secretary General of FIDH and a member of the Human Rights Watch Middle East and North Africa Advisory Committee – is arbitrary and in violation of international law, as it results from his exercise of the right to freedom of opinion and expression as well as freedom of thought and conscience, and furthermore constitutes “discrimination based on political or other opinion, as well as on his status as a human rights defender.” Mr. Nabeel Rajab’s detention has therefore been found arbitrary under both categories II and V as defined by the WGAD. 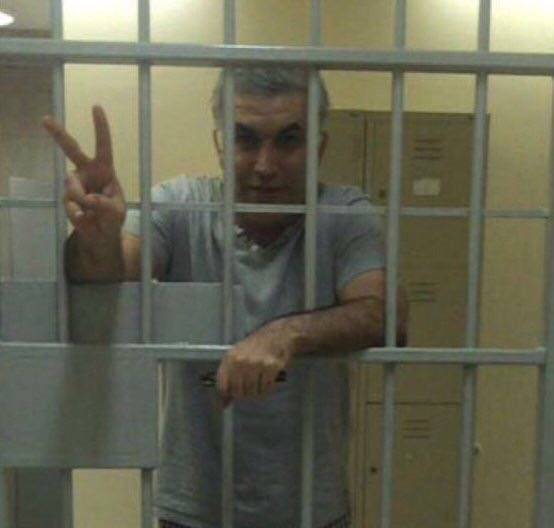 Mr. Nabeel Rajab was arrested on 13 June 2016 and has been detained since then by the Bahraini authorities on several freedom of expression-related charges that inherently violate his basic human rights. On 15 January 2018, the Court of Cassation upheld his two-year prison sentence, convicting him of “spreading false news and rumors about the internal situation in the Kingdom, which undermines state prestige and status” – in reference to television interviews he gave in 2015 and 2016. Most recently on 5 June 2018, the Manama Appeals Court upheld his five years’ imprisonment sentence for “disseminating false rumors in time of war”; “offending a foreign country” – in this case Saudi Arabia; and for “insulting a statutory body”, in reference to comments made on Twitter in March 2015 regarding alleged torture in Jaw prison and criticising the killing of civilians in the Yemen conflict by the Saudi Arabia-led coalition. The Twitter case will next be heard by the Court of Cassation, the final opportunity for the authorities to acquit him.

The WGAD underlined that “the penalisation of a media outlet, publishers or journalists solely for being critical of the government or the political social system espoused by the government can never be considered to be a necessary restriction of freedom of expression,” and emphasised that “no such trial of Mr. Rajab should have taken place or take place in the future.” It added that the WGAD “cannot help but notice that Mr. Rajab’s political views and convictions are clearly at the centre of the present case and that the authorities have displayed an attitude towards him that can only be characterised as discriminatory.” The WGAD added that several cases concerning Bahrain had already been brought before it in the past five years, in which WGAD “has found the Government to be in violation of its human rights obligations.” WGAD added that “under certain circumstances, widespread or systematic imprisonment or other severe deprivation of liberty in violation of the rules of international law may constitute crimes against humanity.”

Indeed, the list of those detained for exercising their right to freedom of expression and opinion in Bahrain is long and includes several prominent human rights defenders, notably Mr. Abdulhadi Al-Khawaja, Dr. Abduljalil Al-Singace and Mr. Naji Fateel – whom the WGAD previously mentioned in communications to the Bahraini authorities.

Our organisations recall that this is the second time the WGAD has issued an Opinion regarding Mr. Nabeel Rajab. In its Opinion A/HRC/WGAD/2013/12 adopted in December 2013, the WGAD already classified Mr. Nabeel Rajab’s detention as arbitrary as it resulted from his exercise of his universally recognised human rights and because his right to a fair trial had not been guaranteed (arbitrary detention under categories II and III as defined by the WGAD).The fact that over four years have passed since that opinion was issued, with no remedial action and while Bahrain has continued to open new prosecutions against him and others, punishing expression of critical views, demonstrates the government’s pattern of disdain for international human rights bodies.

To conclude, our organisations urge the Bahrain authorities to follow up on the WGAD’s request to conduct a country visit to Bahrain and to respect the WGAD’s opinion, by immediately and unconditionally releasing Mr. Nabeel Rajab, and dropping all charges against him. In addition, we urge the authorities to release all other human rights defenders arbitrarily detained in Bahrain and to guarantee in all circumstances their physical and psychological health.