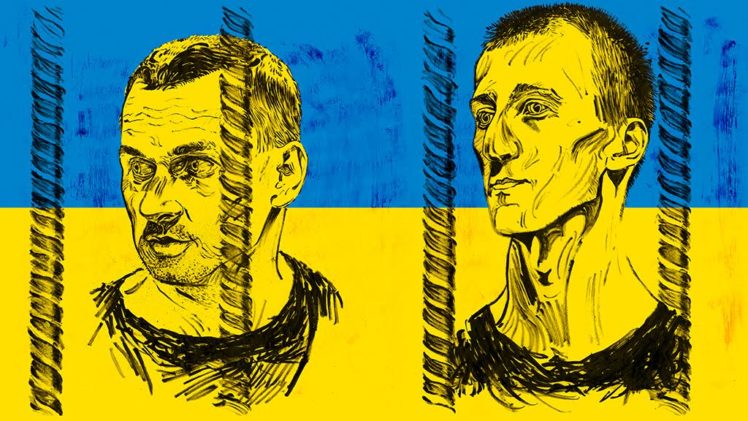 To the Vice-Chancellor, the Federal Minister for Foreign

Affairs of the Federal Republic of Germany,

As of today, about 60 Ukrainian citizens have been detained on political grounds in the territory of the Russian Federation and the occupied Crimea. Most of them have been subjected to torture or inhuman or degrading treatment or punishment to force false confessions about the actions they did not commit.

Stanislav Klykh’s appeal to the European Court of Human Rights is a clear illustration of illegal treatment by the state authorities of the Russian Federation:

“[…] In order to force me to testify, I was subjected to illegal methods of inquiry and investigation, expressed in causing me beatings and injuries, including using handcuffs and electric current, prolonged kneeling, resulting in numerous scars on my wrists, knees […] I was kept in the prison yard for several days without any water or food. As a result of the application of these methods, I was brought to a state of dystrophy, I could not hold a spoon, a pen in my hands, since the hands were dislocated as a result of being handcuffed to the bars”.

The situation is complicated by the unsatisfactory conditions of detention, which further contribute to a sharp deterioration in the health, development and exacerbation of chronic and other diseases.

The lawyer of the Ukrainian film director Oleh Sentsov, who was recognized as a prisoner of conscience by Amnesty International, recently announced a sharp deterioration in the health of the illegally imprisoned. According to him, due to prolonged overcooling, the symptoms of rheumatoid arthritis exacerbated and problems with the heart began.

We draw attention to the fact that human life and health are the highest values of every civilized state. The right of everyone to the enjoyment of the highest attainable standard of physical and mental health is guaranteed by Art. 25 of the Universal Declaration of Human Rights of 1948, Article 11, 12 of the International Covenant on Economic, Social and Cultural Rights of 1966, as well as Article 11 of the European Social Charter of 1996.

This year, the representative of the Russian Federation was elected as a President of the 70th World Health Assembly, the Charter of which was signed by the Russian Federation in 1946. Thus, she acknowledged that “the possession of the highest attainable standard of physical and mental health is one of the fundamental rights of everyone, regardless of race, religion, political beliefs, economic or social status”.

In addition, according to Art. 26 of the Federal Law of 21.11.2011 No 323-FZ “On the basis of public health protection in the Russian Federation” persons, who are in custody, serving a sentence in the form of restriction of liberty, arrest, deprivation of liberty or administrative arrest, are entitled to receive medical assistance, in particular, in necessary cases in medical institutions of the state health system and the municipal health care system in accordance with the legislation of the Russian Federation.

In pursuance of this Law the Government of the Russian Federation adopted the Resolution dated 28.12.2012 No 1466, which approved the Rules for the provision of medical care in medical institutions of the state and municipal health care system for persons held in custody or serving a sentence in the form of deprivation of liberty. The Rules provide for the possibility of inviting the medical specialists of the said medical institutions for consultation if it is impossible to provide medical assistance in the institutions of the criminal and executive system.

We note that all citizens of Ukraine, who are held for political reasons in the territory of the Russian Federation and the occupied Crimea, need proper medical care. Among them, Dmytro Shtyblikov, who after detention lost 30 kg and was brought to a dystopia, Stanislav Klykh, who lost his mental health after the torture that he suffered, Oleksandr Kostenko, who, due to the lack of an operation, runs the risk of losing the arm broken by the FSB’s staff, Oleksandr Rolchenko< who was in a hospital with a diagnosis of underweight, Volodymyr Dudka, who has been practicing self-medication with a stomach ulcer for ten months, Arsen Dzepparov, who is not provided with medical assistance despite cold kidneys, loss of hearing in his left ear and a sharp deterioration in vision, 19-year-old Pavlo Hryb who due to his disability is constantly taking drugs, so the lack of medicines and proper medical treatment in prison led to the appearance of ulcers on his body.

These are just a few examples of violation of the international obligations by the Russian Federation as for the right of Ukrainian political prisoners to the highest attainable standards of physical and mental health. From the moment of their illegal detention, independent physicians do not have access to them, and therefore, they cannot assess their health and provide proper medical care.

We address you with a request to raise before the Government of the Russian Federation the issue of the need to organize the access of physicians from the International Committee of the Red Cross and other reputable international health organizations to provide qualified medical assistance to Oleh Sentsov and all Ukrainian political prisoners from the LetMyPeopleGo list.

NGO “Association of Relatives of Political Prisoners of the Kremlin”