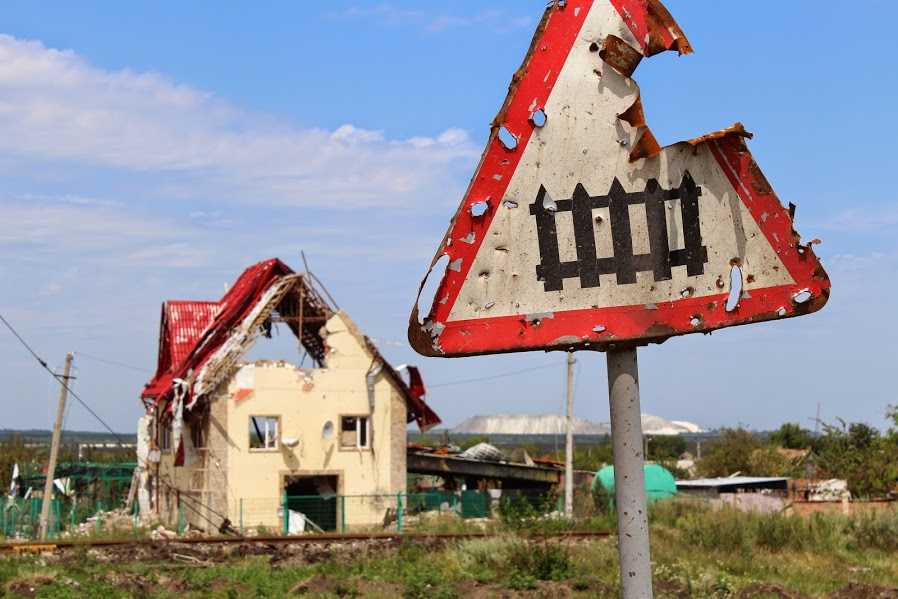 In mid-April the Center of documenting war crimes Ukrainian Helsinki Human Rights Union (UHHRU) presented a ” memory card ” – an interactive map, on which all the victims of war are marked as “ATO”. To date, the map marked the death of 3,650 people – the project is still in beta, but after a few months, the number will increase significantly. On the map are marked and will mark all the dead – and the Ukrainian side, and “that”, the military and mercenaries, volunteers, civilians, women, men, children. Documentation Center Coordinator Aleksey Bida told how the map is created, how the information is verified – and how many of the victims of an unnamed war in question.

“Kontrakty.ua”: State you somehow helped in the creation of maps?

– We collect the information in part from public sources, partly from our own research. Therefore, indirectly, state agencies, we somehow help. For example, the site Memory Book, where we take about our fallen combatants, created with the support of the Ministry of Defense, the National Memory Institute, and the National Museum of Military History of Ukraine. The site itself do the volunteers on their own, but with the support of public institutions – and publish data about our dead soldiers. They are now in the book of 3410 people, we are part of this information to use.

K: And you recheck it?

– Yes. So, for example, we found two people more in March 2017. This is because they are not made to the lists of volunteers who are not assigned to any official departments, and Memory Book are none. Although this on their website seen several civilian – Elena Kulish and her husband – her friends who lived near Luhansk airport, helped the army, was taken to Lugansk airport water products, we can say were volunteers – but then the word is still kak it was not common.

K: You, in contrast to the Memory Book, notes on his map of all victims, not dividing them or on what grounds. What do you estimate the real number of victims?

– In August of last year, representatives of the UN monitoring mission voiced figure of 9500, but I think that this figure can easily get close to 12 thousand.

By: United Nations somehow do not think so?

– So. But they also do not have access to complete information about the number of victims from the other side, and in addition, they take only official sources of information – and we try to work with other sources. And moreover, in different categories – civilians and combatants, on this side and on our side – when working with sources having different difficulties. It is clear that in determining the number of dead, their names, and so on, first of all the difficulty that Russia hides the real number of victims, and indeed hides its presence on the territory of Donbass. We are trying to find this information on their own – through various resources, through social networks, groups, which may be referred to the people who died, even after the application for photographing the graves – where we can also find some information. For example, it points out some monuments, where a man was killed, sometimes even bringing. For example, died in Debaltsevo “for the freedom of New Russia” or something like that.

K: How do you get information about the dead civilians on the other side?

– A survey of people living there, including by phone – we are given such information. We compare it and analyze. Plus, we are monitoring the resources, which are conducted on the other side – like “Ukraine is killing us.” Interesting resource – but we try to double-check this information through alternative channels, because this information can also be a means of manipulation.

K: Interesting? You have strong nerves.

– I think I have a professional burnout and have some problems with emotional reactions. There is another interesting source. This person writes a blog under the name Necromancer – he collects its base, it is open to the Google-tables, it can be easy to see – and, perhaps, she had the most complete. But who is he, how he collects the information on the other side, do not understand. We do not know anything about him – where he lives, who he is. We wrote to him – he does not answer. And it would be interesting to get acquainted with him.

K: Why is there no information on the death toll for 2017 on your card?

– Now in the network, in fact, draftovaya version of the map – there are lots of bugs, there is work to do. To date, we have information on more than six thousand people, all of them combatants, whose names we can make to this card. In the meantime, there is 3650, and all of them died before July 2016.

By: Online now shows only the soldiers?

– Yes, because of the combatants and the one on this side and we’ve been gathering information. A civil, we just started working – at the same time there is no consolidated list of those killed in the public domain. We request this information from the local councils, mainly township. And then there are times when there is no administration in the village there, and the registration of deaths resulting from fighting simply non-existent. For example, in Zaytsev is in a gray area – we recently went there, and there is no such registers at all. You can get information only from local residents. We have found that a total of Zaitsevo 12 people died during the fighting. In this case, this information can not be verified – the cemetery is mined.

K: On the map in some cases, on-site service and the status of the slain indicated “Russian army”, and in some – “Russian mercenary”. How do you find out this information?

– In the first case we are talking about the people who were at the time of death as part of some units of the armed forces of the Russian Federation. First of all, this information relates to the point inputs personnel of the Russian military in the territory of Ukraine during an exacerbation – Debaltsevo Ilovaysk. Of course, now constantly emerge some Grushnik, feesbeshniki or people of any other special units that are sent to us for a week to perform the dot tasks in small groups. Naturally, they were carefully encrypted – and you can identify them by a call only. Here we define as their mercenaries.

They do a lot of nuances that we often can not determine the exact place of death, this information requires clarification. And on each individual card of the deceased on our site have the opportunity to clarify some information, if someone is peeking this card, want something to add or clarify.

K: Have you contacted the Russian journalists, activists who were investigating the killed Russian soldiers and citizens in Donbas?

– Not yet. While we understand with greater technical card problems. A similar development has never been done, and we will solve the problem, then you need to work with the filling of the card and identity of these people.

K: Our military and civilian you have notes – what did you do, do you have children, and so on. For the dead, who are fighting on the side of the unrecognized republics, or the Russian military will also have this information?

– Yes, we are planning to make such data.

K: How does the search on the map?

– Now you can search for a person by name, place of death, date of death, age, sex, country of origin and the status of – military or civilian. At the time of card development, we realized that it is not sufficient merely to render parts – and we will do the tabular list of the dead. It will search for more complex parameters – maybe someone will want to keep track of the dead on the unit, for example. This function is provided. Another option – at the place of burial. It is very important that people, relatives, friends, can come and remember. We’re talking about the memorialization of memory preservation of these people.

K: Actually, this is the key question – why such a card? It is clear that it is convenient to work with journalists, and it is clear that it is important for the bereaved relatives. But why is it the rest – when you consider that it marked all the dead, and not just with our or on the side?

– Our card – this is part of what is included in the broader concept of “transitional justice”, which is used in countries emerging from armed conflict or revolution. Within the framework of transitional justice, in addition to restitution, compensation for moral and material losses, is also expected satisfaction. We are talking about a whole set of actions, the purpose of which – to establish the truth, punish the perpetrators and reconciliation. Any conflict come to an end, and sooner or later all these people have to live together.

K: That’s assuming that we will be one country.

K: And Ukraine as a state realizes that such a transitional justice, and that all this must be done to end the conflict and reconciliation?

– Not yet. All this unpopular topic – especially the part that deals with money. In Ukraine, it is difficult to achieve even social benefits, not what compensation to victims of the conflict.

K: When you plan to run the card is not in the test mode?

– I think it will take a month – and this site will significantly expand the base and the ability to work with her.

K: You are in an interview last year said that Ukraine is working on the creation of the state of the interdepartmental commission on the documentation of war crimes – it was created?

– No. Constantly changing the composition of the Commission, the conditions of its operation. All being transferred from department to department, and while there is no activity in this regard. During this time we managed to establish contact with the Security Service, GWP, with the Ministry of Defense General Staff – so we dot cooperate with these agencies.

By: SBU provides you with some information?

– Only one that is not classified. But the most problematic of the SBU departments: first, they have nearly all classified. Secondly, it is a rigid hierarchical structure, everything is solved first person, so at a horizontal level to co-operate with them is impossible. From the Main Military Prosecutor’s Office is much easier – they come to us, each investigator separately sends us a request for information that they would like to receive.

K: What do you ask of the GWP?

– Now GWP collects information on the fact of Russian aggression: in fact, they are focused on people who were in captivity. They have separate production of Lugansk region, separate – in Donetsk. Accordingly, they turn to us for information about the people who were there, evidence of these people we had interviewed. So the process is adjusted. Now we have also signed a memorandum of cooperation with the General Staff.

K: Not too late to the prosecutor’s office started to collect evidence of military aggression? Now in the process of the UN court at the suit of Ukraine to Russia?

– Some facts they received more from the Security Service, which until 2016 was collecting all this data, and then transferred to the General Prosecutor’s Office. We are preparing a purely formal things – documents, protocols.

– I saw the court’s decision. It was predictable – we have quite a weak justification for Russian aggression facts in the Donbass, and it is not surprising that the judgment of the Donbas it is. And the facts are difficult to collect, and need to file a properly structured and that it is easy to understand the court – which was not done. Ukraine has no such experience, we have to learn on the fly. International organizations (GRC, FIDH) provide advice and training on the ISS standards.