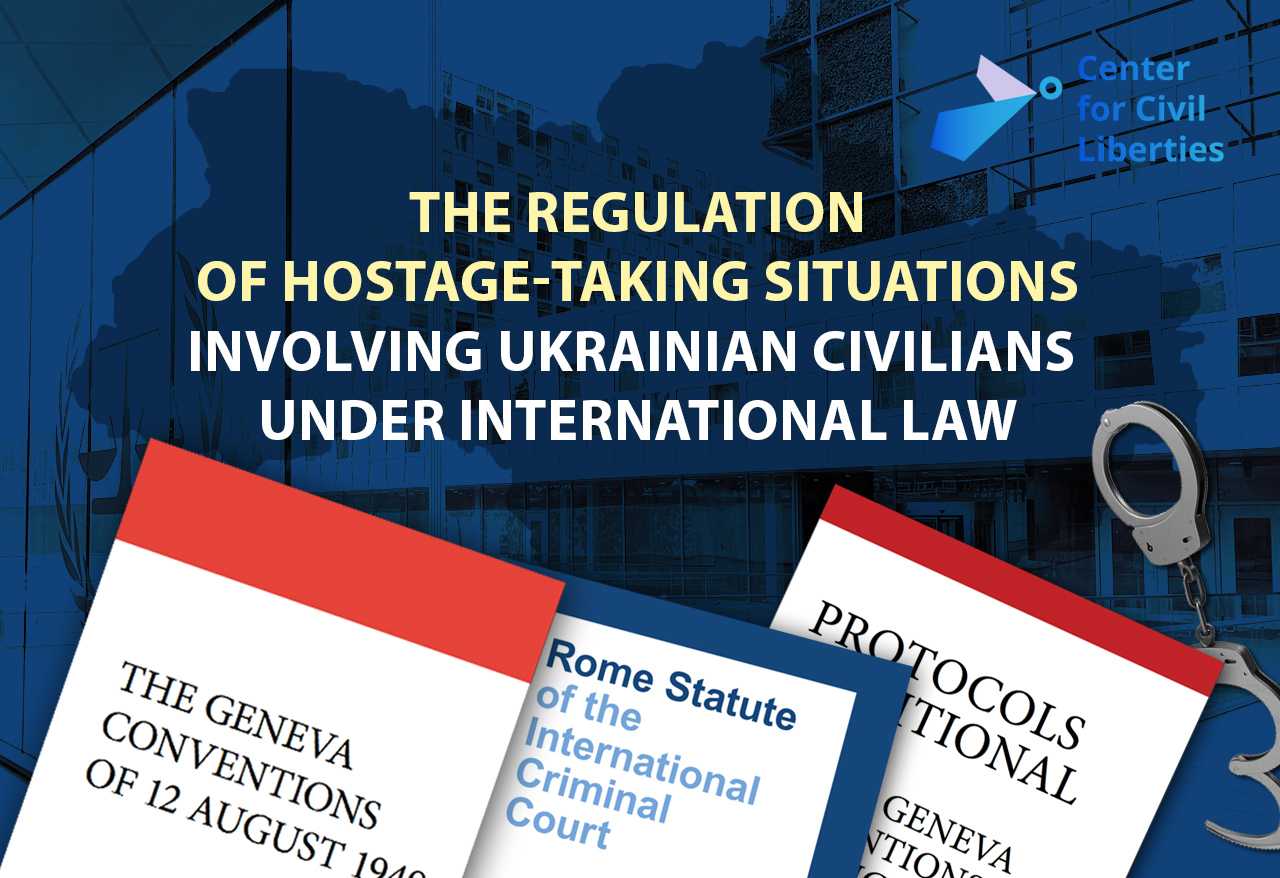 Russia’s invasion of Ukraine on 24 February 2022 and the ensuing armed conflict has been accompanied by a number of abuses, such as hostage-taking, against the Ukrainian civilian population that could be qualified as international crimes (crimes against humanity, war crimes).

On June 29, the UN body responsible for monitoring the human rights situation in Ukraine denounced the widespread arbitrary detention of civilians in the territory controlled by the Russian armed forces. According to this body, since February 24 2022, the arbitrary detention of civilians has become widespread in the territory controlled by the Russian armed forces and affiliated armed groups. In total, the OHCHR documented 248 cases (214 men, 33 women, 1 boy) in the period from 24 February to 15 May 2022, although the actual number is likely to be much higher, with the Ukrainian government claiming over 1,000 hostages. The majority of victims were current or former local government officials (65 cases), human rights defenders and civil society activists (42 cases), journalists (8 cases), religious workers (4 cases) and retired military personnel from the Ukrainian armed forces (10 cases).

The report also revealed that civilians were usually arrested in the street, at their homes or workplaces during so-called “checkpoints” and were held incommunicado in improvised detention facilities, unable to provide information to their relatives about the reasons for the arrest or the place of detention.

In addition, the Office of the High Commissioner for Human Rights was able to corroborate complaints of torture and ill-treatment of persons in detention to force them to confess cooperation with the Ukrainian government, to provide information to the Russian armed forces or to cooperate with them. In particular, victims have reported being kept tied up and blindfolded for several days; beaten with hands, legs or sticks; subjected to mock executions; threatened with sexual violence; placed in a locked metal box; forced to sing or shout glorifying slogans; denied or insufficient food or water; and held in overcrowded rooms with no sanitary facilities.

Thus, in times of armed conflict, which characterizes the Russian-Ukrainian situation, international humanitarian law adopts a particularly protective stance towards civilians. The prohibition of hostage-taking is indeed recognized as a fundamental guarantee for persons hors de combat in Additional Protocols I and II as well as in Article 3 common to the Geneva Conventions.

Finally, it is important to note that cases of hostage-taking in international and non-international armed conflicts have been condemned by states, as well as the United Nations, notably in the context of the Gulf War, Kosovo, the Middle East, Sierra Leone, Chechnya and the former Yugoslavia.

Written by Élise le Gall, Lawyer at the Paris Bar and at the International Criminal Court and Nicolas Stevens, trainee at LE GALL AVOCATS.

Definition of armed conflict?
ICTY in Tadic case: “armed conflict exists whenever there is a resort to armed force between States or protracted armed violence between governmental authorities and organized groups or between such groups within a State. IHL applies from the initiation of such armed conflicts and extends beyond the cessation of hostilities until a general conclusion of peace is reached; or, in the case of internal conflicts, a peaceful settlement is achieved. Until that moment, IHL continues to apply in the whole territory of the warring States or, in the case of internal conflicts, the whole territory under the control of a party, whether or not actual combat takes place there.”

Does Russia’s invasion of Ukraine violate international law?
The 2022 Russian invasion of Ukraine violated international law (including the Charter of the United Nations) as well as the occupation of Crimea in 2014 and staged an artificial secessionist movement in Eastern Ukraine which will be exploited as a pretext for Russian February 2022 intervention.

Is war illegal under international law?
The use of force is prohibited under the Charter of the United Nations. Nevertheless, international humanitarian law has to be applied equally by all sides to every armed conflict, regardless of whether their cause is justified.

According to Art. 2(4) of the UN Charter: “All members shall refrain in their international relations form the threat or use of force against the territorial integrity or political independence of any state, or in any other manner inconsistent with the Purposes of the United Nations, Charter of the United Nations”.

Does the Geneva Convention apply to civilians?
Civilians in areas of armed conflict and occupied territories are protected by the 159 articles of the Fourth Geneva Convention. Civilians are to be protected from murder, torture or brutality, and from discrimination on the basis of race, nationality, religion or political opinion.

Civilians should be treated as “protected persons,” not prisoners of war (POWs), under the Geneva Conventions applicable to the armed conflict in Ukraine.

International humanitarian law (IHL) prohibits individual or mass forcible transfers of civilians from occupied territory to the territory of the occupying power, which can constitute a war crime. International humanitarian law also prohibits hostage-taking. Detaining civilians for the purpose of using them in future prisoner exchanges would constitute the war crime of hostage-taking.

What happens if a country violates the rules of war?
States can enforce the rules through their national legal systems, diplomatic channels or international dispute resolution mechanisms. War crimes can be investigated and prosecuted by any State or, in certain circumstances, by an international court. The United Nations can also take measures to enforce IHL.

United Nations Human Rights Monitoring Mission in Ukraine, “Situation of human rights in Ukraine in the context of the armed attack by the Russian Federation”, 29 June 2022