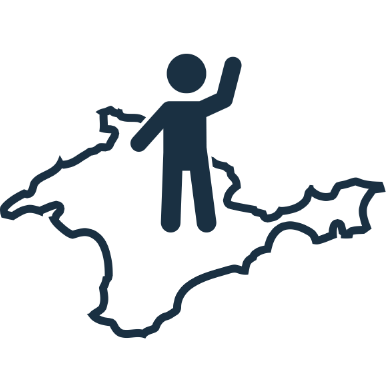 As soon as the Crimea announced a referendum in March last year, an international group of human rights activists led by Andrey Yurov, a member of the Human Rights Council under the President of Russia, decided to create the Crimean field mission. For almost a year about 20-30 “monitors” of several countries are constantly working “in the field”, collecting information for reporting and analysis of contributions, which later fall on the table to the members of the UN, OSCE, Council of Europe and the Commissioner for Human Rights in Russia and Ukraine.

Voronezh activist Dmitry Makarov – Deputy Head of the Crimean field mission from the Russian side. It rarely happens now in his hometown: about one week a month, Dmitry spent in the Crimea, analyzing the situation with human rights. The correspondent of “7×7” Dmitry Makarov told what is happening in the Crimea, which human rights defenders have to solve the problem in the first place, and why the residents of the Crimea is difficult to adapt to the new legal reality.

– Dmitry, you are saying that the purpose of the Crimean field mission – analyst. Who, then, is engaged in protection of rights in practice?

– Around the human rights situation in the Crimea is now formed a coalition of Russian and Ukrainian human rights organizations, called Initiative for Human Rights group in the Crimea – the name given by analogy with the first human rights organization in the Soviet Union. That it is now called upon to solve problems faced by the inhabitants of the peninsula, because they were in obscure legal realities, with broken security mechanisms. Last spring, when the question of annexation of the Crimea, we have seen the growth of violations, but then had to wait for another does not. Now the situation has stabilized, but some complicated cases continue to occur. Problems arise as they start to use Russian legislation which is much stricter, including in the field of political rights and freedoms.

– What is the fundamental difference between the laws of the two countries?

– For example, the freedom of assembly in Russia is much more regulated, “is regulated.” I explain a specific example. May 18, the anniversary of the deportation of several thousand Crimean Tatars gathered in the main street – and faced various restrictions, the presence of riot police, the alleged overlapping routes. This problem is not only the Crimean Tatars: similar situation and fans recently deceased musician Kuzma Skryabin, who wanted to hold the event to his memory in some towns of the Crimea. All these toughening of Russian legislation is particularly visible in the contrast with the fact that it was in the Crimea to join Russia. In Ukraine, the usual practice was a non-violent protest. In Russia, protesters clashed with fairly substantial fines from 10 to 50, and more than a thousand rubles,

– Tightening concerns only freedom of assembly?

– What other groups, in addition to the Crimean Tatars, were vulnerable to the current legal situation?

– Few somehow remembers now about the prisoners and their situation is also unclear. They were imprisoned in the Ukraine, and now find themselves under the jurisdiction of another country. Those who have not received the Russian citizenship, Ukraine “to take” is not particularly seeks. Another interesting situation: the person to be released due to the amnesty declared on Ukraine, but Russia does not recognize. Somehow, all the changed conditions are treated not in favor of man. Now we check the information about the alleged number of sentences that have been manipulated in the direction of the prisoner in connection with the transition to the jurisdiction of Russia. At least that’s what we have already received several posts and from the victims themselves, and through the media.

– And if there are some issues that affect not only the minority?

– Of course, this confusion with documents. In my opinion, this is not in any frame not climbing history – automatic assignment of Russian citizenship, and only a month out to give it up – wishing to do so simply do not have time. Yes, and it is not clear on what grounds it had to do, those who was a citizen of Ukraine and abandon that nationality was not going to. We also know of cases where people were forced to take a Russian passport under threat of dismissal. It is clear that a significant number of, if not the majority of the Crimean people, still want to get it, but we, as human rights activists, have to talk about minorities, even if they are someone, the same politicians seem insignificant or small. And Crimeans feel vulnerable position both from Russia and from Ukraine. For example, Ukrainian authorities do not recognize the issued after March in Crimea birth certificate. Children do not release from the territory of the peninsula, as they allegedly invalid documents. In fact, to obtain a valid document, you need to go to Ukraine, but this can not be done without a valid document! Vicious circle.

With the ownership of the land is also a big problem – all the registers were in Ukraine, and not everyone can prove that he is lawfully resident in a particular area – for example, if the documents are lost. And as we now treat squatting, when the Crimean Tatars returning from places of deportation, and their homes have been occupied by other people? They had to learn the territory, build housing. Will it be legalized, taking into account that recently Aksenov [head of the republic of Crimea] has said it will fight the squatting? Such cases are, by the way, among the “Russian” population there. Not only human rights is created confusion – the same story with the capture of enterprises: in the area of ​​”gray” Many property rights change hands, including, in my view, illegally. I can call it polubanditskim redistribution,

In general, the transition to the new legal reality always applies to all. Another big problem for Crimean – a Russian anti-extremism legislation. The inhabitants of the peninsula did not even know elementary that you can be held responsible for the census in social networks. Our anti-extremist legislation in general, to put it mildly, strange, and only its enforcement … How can we break with searches at Muslim religious institution where children are learning? All these norms give an extra reason to break into someone’s house, supposedly guided by anti-extremist legislation.

– Are Russian legislators understand, in what situation they are “driven” Crimean people? Does it understand the Ukrainian side?

– Interests of residents, almost no one does not take into account – the authorities are guided by geopolitical considerations. Someone important to call the Crimea occupied territory, someone – under the threat of criminal prosecution to consider the Russian peninsula. But in fact neither side seeks to solve the problems of the Crimean people.

– And then who is to blame?

– A feeling that operates a principle of collective responsibility. The Russian authorities are pursuing the same Crimean Tatars, whose only crime is that they are themselves. Ukraine introduces the law “on the temporarily occupied territories”, which discriminates against all Crimeans. Those US sanctions against all the inhabitants of the Crimea, too, life is not perfect.

– And there is already some progress for the better, when it was possible to protect human rights in a “gray” zone?

– Although we almost never directly involved in the work on individual case studies, in some situations, the fact of drawing attention helps to solve any problems. In particular, when people are returning from deportation places, fell into the trap of migration legislation, they are enjoined to leave the territory of Crimea. Due to the fact that we are talking about this issue, referring to the international rule of law, the authorities began to look for compromises.

– To listen to your reports of power?

– At least representatives of the Russian people read them carefully. Ukrainian authorities too, and they sometimes refer to our information. But what conclusions they make from all of this – we can not know. First of all we are working with the Commissioner for Human Rights in both countries. And they in their actions and public statements are based on our information.

– And what could you advise by residents of the Crimea?

– self-organize. In Crimea used to be many times more institutions of civil society – they need to recover and grow. Civil society organizations can make to the agenda issues that the authorities prefer to remain silent.

– Yes. For example, to extract information from different sources, to see and hear all sides of the conflict. Remember not only the majority but also of minorities. We will be happy to those who are willing to help the Crimean field mission in its activities.