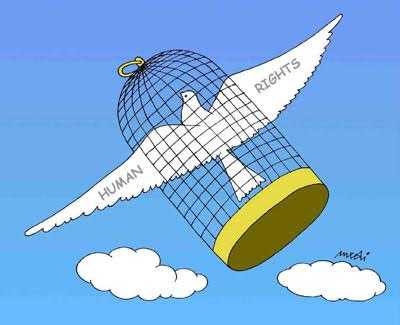 – For example, police reform stalled. And for good reason. Only in October last year raised the salaries bulk of police – investigators, operatives, the local inspector. And before they received much less patrol. Disappeared motivation to work. Shortage in the areas reached 30 percent. It does not have someone to work with.

– What should I do first?

– Who have the opportunity to continue to change. First of all, in the criminal section. Most necessary for today – the reform of the Criminal Investigation and the investigation.

– What are the effects of human rights guard the most?

– The lack of mercy on the part of the state to its citizens. Everything comes from poor governance.

Recently I spoke to the chief doctor of the psychiatric hospital of Kharkiv. He said that from the budget to the patient per day on food are seven hryvnia for treatment – six. On drugs means no. The institution of the situation so decide. Privileged categories, war veterans or consumptive assigned 56 hryvnia powered. Their pros and divide at all. Also, spending on food by all means from the paid services that an institution provides to citizens. He says: “I want to be a doctor, not a director of the concentration camp.” Appeals to all authorities – dull.

Clearly, the war takes more resources. But you can not treat people like this.

– whether the police are changing?

– It is not that they do not do anything. But they are ineffective. Prosecutors complain that police salary is more than theirs. But the re-certification of police virtually failed. Because it was carried out on the basis of ill-prepared legal act. As a result, one could appeal against the dismissal in court.

– It was less. The new Criminal Procedure Code contains many fuses from bad behavior, torture and the like. For example, to detain a person, you need the sanction of the investigating judge. Also, there is a norm of getting free legal aid to those who can not afford a lawyer.

If the victims of violence were about a million in the police in 2011, the year before – 409 million. The number of those who have experienced torture, reduced from 113 thousand to 62 thousand. But it’s still a lot.

– Ukrainians are turning to the European Court of Human Rights?

– Applications become greater. Because the added complaints related to the military conflict in Donbas. For example, former prisoners of war and civilians complain of unlawful deprivation of liberty, torture. Only our organization in the past year, has written more than 200 such applications. More than 300 – colleagues from the Ukrainian Helsinki Union.

Many cases involve loss of property as a result of hostilities. This is an obvious violation of property rights. The problem is that there is no compensation calculation mechanism, and the state does not solve the issue. People can not get a refund from him, turning to the European Court. You can file lawsuits against Russia as an aggressor against Ukraine – for inaction. When there is evidence that it is your property, an application to the European Court prospectively. Some applicants were denied because they only sent photos of destroyed houses. And the documents that would confirm the right of ownership, could not provide because they have destroyed, along with housing.