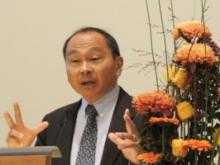 Yohana Shyutte Prize is the most prestigious annual award in the field of political science.

It is awarded, since 1995, its size is 500 thousand. Kronor (about 50 thousand. Euro), and among the winners of such classics of modern political and social theory, as Robert Dahl, Sidney Verba, Ted Skocpol, Ronald Inglehart.

This year’s prize winner Yohana Shyutte became prominent social thinker and analyst at Stanford University (USA) Francis Fukuyama. Award he received for the book “The Origins of Political Order” (2011) and “The political order and political decline” (2014). As noted by the Chairman of the Award Yohana Shyutte Committee, Professor at Uppsala University (Sweden) Lee Bennih-Bjorkman, “these two works represent a fascinating attempt to make sense of humanity’s desire to create an effective political organization that would contribute to human society by protecting each individual member of society.” The ceremony took place October 3, 2015 at the University of Uppsala. Being among the invited foreign guests, the publication “The Mirror of the week. Ukraine” to take this opportunity,

– Oswald Spengler called “the decline of Europe.” You, by analogy, could be called the “end of history”. Now, 25 years after the release of this world famous work, what can you say about the set of approaches and ideas?

– “The End of History” means the end of the period of modernization, its key processes. That is the end of history, we must clearly identify the optimal and most attractive model of political and state structure. Such is the democratic state with a market economy form. It is unlikely that someone from serious analysts would argue that as this model can serve modern Islamic states or China. What really changed in those 25 years, so it is a fact reduce the prestige of democracy, and the cause is, first and foremost, the economic crises in the US and the EU. In addition, we are witnessing the process of designing “anti-democratic message of” a kind of challenge to democracy on the part of, for example, Russia and China. I do not think that that message will be dominant, but democracy, unfortunately,

– Winston Churchill said that democracy – it is a bad form of government, but nothing better than mankind has not invented. Do you agree with him, and if so, why?

– I think the governance process should be supported, it assumes responsibility to the whole population of the country, and democracy – the best mechanism for that. An alternative would be to use only the rulers of his position for personal gain. An example of such a state – the modern Russian Federation. This is hardly a country which would like to live most people. Therefore democracy and is now the best policy tool. However, it may include other mechanisms, such as nationalism, using democratic forms and procedures. I think that modern Russia is experiencing a huge nostalgia for the Soviet past and the great empire. Dangerous when such trends camouflaged democratic rhetoric and procedures.

– What, in your opinion, the main challenges of modern democracy?

– This can be a lot to talk about. First of all, it’s economic problems. Thus, the EU has only recently gone through a serious economic crisis. The next group of issues related to migration – they are now on everyone’s lips. That is to say, the internal political challenges. There are also foreign-related, first of all, with Russia and China and their growing territorial ambitions. And these calls should receive strong opposition from the international community than now.

– In the lecture, you said that the fate of the modern world is being solved in Ukraine, as it was here that are competing democratic governance models and their alternatives. Could you comment on this idea in more detail?

– I believe that the modern state is impersonal, that is, the rulers of defending the public interest, not their own. Spokesmen of these approaches are the elite. And now we are seeing a frank confrontation of the West and Russia in this area. Putin has built a kleptocratic regime that works for the interests of influential people in the system, instead of the whole society. For such a regime characterized by high levels of corruption. This is the type of regime that is trying to build in Ukraine, Yanukovych. And I think those who at one time went to the Maidan to protest, aware that the European Union is another, more modern political regime, and would imagine the same. And here we see the vulnerability of democracy, because Yanukovych was democratically elected president. The same is observed in modern Russia – the majority of the population supports Putin.

– In the twenty-first century, there were two powerful social mobilization in Ukraine – Orange Revolution, and euromaidan. How do you evaluate these events from the perspective of a democratic political order?

– It is extremely important, positive and necessary event. But the problem is, what happens after the establishment of the new political regime. The main problem of Ukraine after the Orange Revolution began contradictions came to power forces, primarily Yushchenko and Tymoshenko. They were extremely busy fighting each other, which led to the flourishing of corruption. Therefore, they were unable to overcome the influence of the oligarchs, gradually regained its control over the country. Consequences euromaidan I estimate is more optimistic. Your current leaders, in my opinion, could somewhat reduce the level of corruption and implement the principles of public management in the management process.

– I know you have visited Ukraine. Your impressions of our country and that you would like to wish our politicians?

– I am very concerned about the prospects of development of Ukraine – you really serious reforms carried out, there are many non-governmental organizations, actively developing civil society. In this regard, I believe that the United States and the European Union have a lack of support for the healthy forces of the Ukrainian society, especially in the conditions when it is faced with serious problems affecting the interests of the world community.

I have many good friends in your country. I think euromaidan grand historical event, one of the most important in our time. Its significance goes far beyond Ukraine. This is a grand battle for the expansion of modern forms of democratic governance. I wish those who came to power, learn to use it in the interests of the country and society.