Speech at the International Forum of dissidents 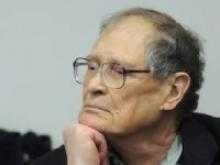 10-11 November in Lviv international forum of dissidents, dedicated to the 40th anniversary of the Ukrainian Helsinki Group. The forum was attended by about a hundred former political prisoners from 15 countries (Belarus, Armenia, Georgia, Estonia, Israel, Canada, Latvia, Lithuania, Germany, Poland, Russia, USA, Ukraine, France, Czech Republic). Among the participants – Sergey Kovalev, a member of the Moscow Helsinki Group, a dissident Soviet political prisoner, the Ombudsman of the Russian Federation (1994-1995), one of the authors of the Russian Declaration of the Rights of Man (1991), the framework document, determine the future of Russian constitutional norms relating to human rights , the developer of the 2nd chapter the existing Russian Constitution – “rights and freedoms of man and citizen”, as well as a number of federal laws affecting human rights issues.

At a press conference on the occasion of the opening of the forum in Lviv Sergey Kovalev said that the Helsinki human rights movement today is in a very serious crisis. “What may be trying to do the current Helsinki movement? What happened when it occurs, – said Russian human rights activist. – The momentum must go back from Moscow, not because it is the center of the world, but because it is the center of evil. The concern is that the public pressed their government. If this momentum again will go to the center of evil, it will be the impetus for what has already occurred in history “, – said Kovalev.

Sergei Kovalev also spoke about the problem of the Crimea. According to him, Crimea annexation was determined in advance by two factors: “First – why not take what you can take away? The second – at the same time, this step helps to achieve an important goal – to not let Ukraine to Europe. That’s the whole depth of the motivation. “

According to Kovalev, Crimean adventure is different scale, suddenness and audacity, but it is not a new Russian strategy. These techniques are repeated in Russian politics since 1917, and it seems to never end.

“These events meets West with indignation. The annexation of the Baltic States did not recognize the 50 years. Ineffectual protests – a sign of weakness. About the trouble you want to forget. Forgotten war with Georgia – only eight years ago. And Crimea is not the topic of the day. Now, on the edge of Syria. Sanctions ineffectual, but not to make the same war. Each outcry is replaced by the next reboot, and no end in sight, “- said Kovalev.

He stressed that one can not indulge the aggressor, you can not pay for their own safety and the fate of other people’s lives.

“It seems that the” cold war “ended with the fall of the Berlin Wall. Now the blind can see that it is not. It is foolish and dangerous to seek a partnership with the aggressor. Now Russia can only force to play fair, and it is impossible to persuade “, – said Kovalev.

He also stressed that comply with the totalitarian regime is immoral and dangerous. She does not want and not even able to “release the reins,” said Russian human rights activist.

“Its main enemies – independence, initiative, competition, freedom of thought. They generate intellectual courage, the need to share thoughts, come to believe and to act in accordance with them. Thus was born the idea of ​​freedom, rights and the concept of civil liability. Everyone has the right to critically evaluate government policies through peaceful means to insist on changing it and seek to influence to this end, public opinion. Moreover, there are situations when it is no longer the right and a civic duty.

These natural qualities – the only engine of progress. Each government understands this, and for each of these qualities are not comfortable. And democratic government frowns, but is forced to rely on such a society. She had no choice. Democracy can not be reduced to the will of the majority. Exaggerated importance of the will – a direct path to totalitarianism. The meaning of democracy – minority rights. All state authority and every citizen is equal before the law. This equality is guaranteed by a rigorous procedure, the violation of which is punishable “, – said Kovalev in his speech.