Public discussions on draft law on prosecution for international crimes 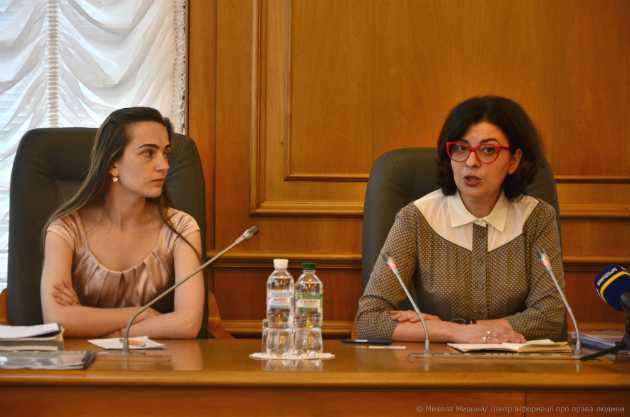 A draft law, which will help prosecute people who have committed crimes against humanity, war crimes, genocide and crimes of aggression, has been discussed in Ukraine.

As the Human Rights Information Centre correspondent reports, the public has drafted the bill which aims to harmonize the Criminal Code of Ukraine with the provisions of the Rome Statute of the International Criminal Court.

According to the Chairwoman of the Center for Civil Liberties Oleksandra Matviychuk, these legislative changes are crucial because there has been a discrepancy between a rule of law and a rule of life already for the second year of the “bloody hybrid war” waged by Russia against Ukraine.

“We have been facing a large number of legal inconsistencies and consequences for the second year already. On the one hand, the proceedings are initiated against the volunteers, who transported the uniforms for the army across the border in 2014, and, on the other hand, the Criminal Code still does not have a concept of ‘crimes against humanity.’ The stipulation of war crimes does not allow the law enforcement agencies to properly qualify wrongdoings,” the human rights activist said.

The bill increases the sentence for torture of three to six years instead of two to five, as provided for in the current Criminal Code. If tortures cause serious bodily injury or death of a person, the sentence will be of seven to ten years. The experts also suggest criminalizing concealing torture and failure to investigate into such incidents.

Moreover, slavery or similar condition may be punished with imprisonment of three to six years, and with the participation of a group of people – of five to eight years.

The acts of aggression which, by its nature, severity and magnitude are a flagrant violation of the UN Charter provides for 10-15 years of imprisonment or life imprisonment.

The working group on elaboration of the bill is headed by Associate Professor of the Criminal Law Department at the Taras Shevchenko National University of Kyiv Kostiantyn Zatoya. The group has consulted with various experts and organizations, in particular, the Parliamentarians for Global Action and the International Committee of the Red Cross.

The bill has been also discussed among MPs, foreign parliamentarians, international and Ukrainian experts, scholars, human rights activists, representatives of the Prosecutor General’s Office, the Interior Ministry and the Security Service of Ukraine.

Human rights activist Oleksandra Matviychuk noted that the authorities should not think that the International Criminal Court in The Hague will investigate into the international crimes. Ukraine itself will have to do that.

She also believes that the government can prevent Russia’s attempts during the Minsk process to achieve full amnesty for militants who committed international crimes.

“To do this, it is necessary to properly qualify the actions of illegal armed groups as a crime against humanity and war crimes. After all, the Minsk agreements do not negate the Rome Statute, the Geneva Convention and the European Convention on Human Rights,” she explained.

Simon Papuashvili, the project coordinator of the NGO “International Partnership for Human Rights” calls on the European Parliament to finance the training of judicial and prosecutorial personnel.

“The EU provides assistance to Ukraine in the reform of criminal justice system. It would be great to spend some money on proper training of judicial and prosecutorial personnel so that they could start to apply the relevant provisions after they become the part of the national law,” he said.